The Charitable Man Loves His Enemies 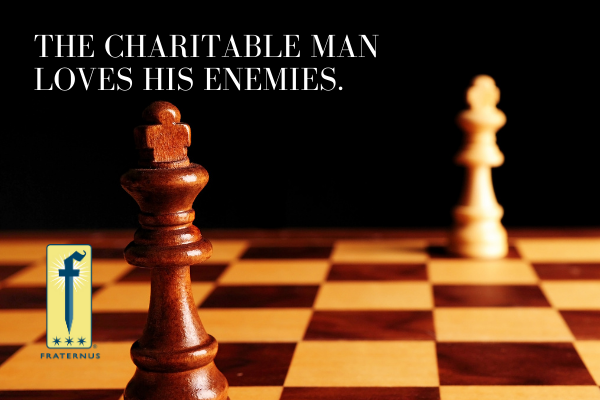 you can't love your enemies

The capacity of man to tame Jesus is staggering.  I don’t mean to tame the reality of Our Lord, but to attempt to make what is hard into something that is easy.  To “tame” something is to make it suitable for our environment – to put the tiger in the cage.

This can happen on different ends of the spectrum, and whatever end you easily judge as the problem, you probably need to examine the opposite end of it as it applies to you.  Here’s what I mean: the only thing worse than wimpy men is machismo men.  Or, conversely, the only thing worse than machismo men is wimpy men.  This spectrum of passivity/aggression is a human extreme, and the extreme you might tend toward is the place where you create the bars to build the cage to “tame” Jesus into affirming your ideas of how He (and we) should be.  The aggressive man might say “offer it up” when he really means “suck it up.”  The passive man might say “say it with charity” when he really means “just be nice.”  Both of them can point to Jesus and make it work for him, and both of them are in error in their understanding of one of Jesus’ precept.

The problem is Jesus is a problem.  He disrupts us with His love, mercy, justice, virtue, and perfection.  Most of all, He disrupts us because He is a Person and not an idea.  His grace is active in us – it does something.  If allowed to act by the submission of faith, He will not be tamed.  And that means “the way” that is Jesus is not easy, but it means we are not alone in it.  The saints are the ones that hear the words of truth and allow themselves to be transformed, not the ones that transform the words of truth to fit their disposition and desires.  In short, you know you’re doing it right when the words of Our Lord are a constant challenge to you, and not merely tools you use to affirm your ways.

For us men I think there is one particular saying of Our Lord that is central to His witness and challenge to us that will also remain one of the hardest commands.  That is, “love your enemies.”  To think of those that have wronged us brings with it the natural impulse of justice, to both feel the wrong and long to make it right.  This is reasonable, even commendable insofar as one loves justice.  If you’re a man that finds this saying easy, you’re not a man I can easily relate to.

The answer – or the deeper understanding – can really only come in one way, and that is to look to God.  When Cain goes to kill Abel, whom he obviously has come to see as an enemy, he refuses to look at God and looks to Cain (God attempts to reason with him, but Cain does not appear to hear a word).  When Jesus forgives His enemies from the cross, His eyes are raised to the Father.  When the first martyr St. Stephen cements the reality that Christians forgive their persecutors by forgiving them during his execution, he too is looking to heaven.

When God offers a very hard way – one that seems almost insurmountable – He is at the same time reminding us that He is the way, that we cannot enact His words in deeds without grace.  This is why the loving of enemies is an act of charity, because it shows that God’s gift of charity has been given to you, because without it you would not love your enemies.  The theological virtue of charity does not contradict natural love, or even justice, but it does go beyond natural capabilities.

This is why Aquinas says that loving one’s enemies is not “more meritorious” than loving our friends.  We would think that the love of enemies is “better” than the love of friends because it is harder.  To that, Aquinas simply says that there is no merit in loving that which is less loveable (your enemy) over that which is loveable (your friend).  He alludes to the verse where Jesus asks what good it is if we love only those that love us – “even the gentiles do that,” meaning that is the basics. In that sense, yes, our love of enemies goes beyond what is natural.  Interestingly, he says that there is a “second” way to think of loving our enemies which does make it more meritorious, and that is in the sense that there is only one reason to love our enemy: because we love God.  Our enemy does not offer us reason to love him – he is by definition unlovable because he causes harm to what we love – so the only way we can love enemies is to see them in a way that sees God in him, and sees his as God sees him.

So, once again, this hard precept is only “solved” by the action of God’s grace in us, which is why charity is a theological virtue – one that comes from God be being infused in us.  To look to our enemy for reasons to love him, or just trying to “see the good” or white-knuckle some good vibes toward him, is not what Jesus wants us to do in order to “love our enemies.”  He wants to transform us, to be what we gaze toward.  Even we were once the enemies of Jesus by sin, and by looking to Him – or letting Him look to us! – we are made His friends.  This hard saying is not proposing an impossible way to live, but to show us once again we cannot live this way without Him, because He is the way.

From Dom Prosper Gueranger’s The Liturgical Year, on the Baptism:

Let us honour our Lord in this second Manifestation of his divinity, and thank him, with the Church, for his having given us both the Star of Faith which enlightens us, and the Water of Baptism which cleanses us from our iniquities. Let us lovingly appreciate the humility of our Jesus, who permits himself to be weighed down by the hand of a mortal man, in order, as he says himself, that he might fulfill all justice, (1 St. Matth. iii. 15.) for having taken on himself the likeness of sin, it was requisite that he should bear its humiliation, that so he might raise us from our debasement. Let us thank him for this grace of Baptism, which has opened to us the gates of the Church both of heaven and earth; and let us renew the engagements we made at the holy Font, for they were the terms on which we were regenerated to our new life in God.