The Charitable Man Loves Jesus in the Eucharist 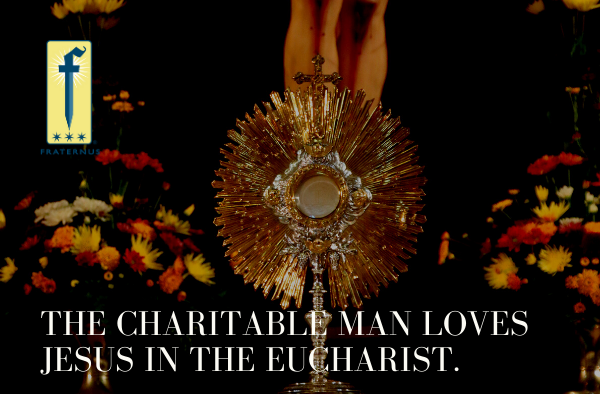 of statues, adoration, and real things

When I was considering converting to the Catholic Church, I had a hard time getting over the statues.  Yes, the saints slapped on coffee mugs and pumper stickers struck me as at least cheesy, but what was with the Catholics and these statues that they kissed, knelt to, prayed toward, and even dressed for different events?  From my vantage point it seemed clear that “don’t make graven images” was a pretty clear command – so what was all this?  Like so many things Catholic, it really didn’t make sense considered in isolation, but as I saw this little piece of devotion and doctrine as a part of the bigger picture, I saw the beauty and truth of it.  Again, like so many things Catholic, it was weird.  And it turned out that weirdness was a strength.  It unsettled me.  And that was good.

The only real reason at that point that I was considering the Church was my growing belief that “authority” in matters of faith had to go beyond me and my bible, alone.  Scripture is clear – and the early Christians made it even clearer – that the apostles received authority that they knowingly passed on to successors who knowingly received that authority, an unending link from Jesus to today’s bishops.  But, how in the world do these authorities come to reason that its ok for that little old lady over there to be kneeling in front of a graven image, lighting candles?

I recall one Protestant pastor explaining that Catholics have images because they don’t have a “personal relationship with Jesus.”  Obviously, that’s laughable.  His theory, however, seemed plausible – if we really had Him totally in our heart, would we need to look at pictures of Him?  Not to mention, would we need pictures of His friends, the saints?

The Eucharist was an answer to this dilemma, or at least the one that helped me to understand (a) how serious the Church takes the Presence of Christ and (b) how His Presence on earth thousands of years ago and today changed (changes) everything, even our understanding of “graven images,” etc.

Simply put, I realized that Catholics recognized the Eucharist as God, as an actually Divine thing, a material object toward which prayers are directed as toward the actual person (or Person in this case).  Or, more simply, God is here – come, let us adore Him.  The image, in contrast, is something toward which we direct a prayer as a representation of the person – not the person present.  The commandment to not make graven images has a part A and B, and most protestants only see A.  Part A: “do not make graven images”; Part B: “and worship them.”  Catholics actually worship the Eucharist explicitly, so whatever reverence is paid to the image of a saint is not nearly as staggering as that act.  They aren’t confused; they know where God is.

That little old lady, therefore, is not confused that the image of the saint is a god of some sort.  She adores the true God, right over there.  He’s here.  This saint in front of her is not in front of her.  That saint’s in heaven and she believes that.  This is a picture or statue – an image.  The sweet lady has eyes and other senses and is helped in her devotions to “look to the saint” in the image, without ever thinking the image is the saint.  The Eucharist, on the other hand, is something we look to with eyes and senses, but mostly with faith, precisely because our senses, though engaged, fail us (sensuum defectui – “our senses are defective” – we sing in the Tantum ergo during Eucharistic Exposition).  It is not an image.  It is what it is.

I should note that, as Robert Louis Wilken shows in the book The Spirit of Early Christian Thought, Christianity has never viewed images and icons of Christ and the Saints as merely representations akin to a family photo, but by looking at them we look upon and consider the fact of the logos, of God made man.  In other words, the sheer fact that God became man means that artwork can in fact present images of God (something impossible before Christ and, therefore, strongly forbidden and unheard of), insofar as they depict Jesus.  And, a holy image is holy by the sheer fact of what it represents, which it is able to represent because of the Incarnation.  They are, therefore, more worthy of reverence that the picture of your mom.  You can throw away a picture of Babe Ruth, but you cannot throw away a blessed image – it must be buried or burned.  But, that being said, even a sacred image of the God-made-man is not nearly as unnerving or mysterious as that God-made-man-made-present-in-the-accidents-of-bread.  Oh, and that sacred substance is received in holy communion.

All of this being said, what became more and more apparent for me, as a soon-to-be former Protestant, was that if I wanted to love Jesus, I needed to love Him in the ways He has made it possible to love Him.  The intimacy He offers by grace is unthinkable, but the ordinary (and extraordinary) means of receiving that grace and returning the love He gives me is in the Eucharist.  At that point, I had no problem kneeling before the image of a saint, begging for their help that I may love the Lord worthily, especially in that most holy and even frightening place: the Eucharist.  That thing up there is the source and summit of my life.  I reverence and kiss a statue, but this Person here, hidden in the appearance of bread, I adore because He is worthy of all my love.  Come, let us adore Him.

From Dom Prosper Gueranger’s The Liturgical Year, on the epiphany:

The Epiphany is indeed great Feast, and the joy caused us by the Birth of our Jesus must be renewed on it, for, as though it were a second Christmas Day, it shows us our Incarnate God in a new light. It leaves us all the sweetness of the dear Babe of Bethlehem, who hath appeared to us already in love; but to this it adds its own grand manifestation of the divinity of our Jesus. At Christmas, it was a few Shepherds that were invited by the Angels to go and recognise THE WORD MADE FLESH; but now, at the Epiphany, the voice of God himself calls the whole world to adore this Jesus, and hear him.

We “fall in love,” but we “rise to agape” (if that means nothing to you then read this article)

Audio Sermon: the Real Presence… do you believe?

Catechism 1394: As bodily nourishment restores lost strength, so the Eucharist strengthens our charity, which tends to be weakened in daily life; and this living charity wipes away venial sins. By giving himself to us Christ revives our love and enables us to break our disordered attachments to creatures and root ourselves in him