The Charitable Man Loves God With His Whole Being 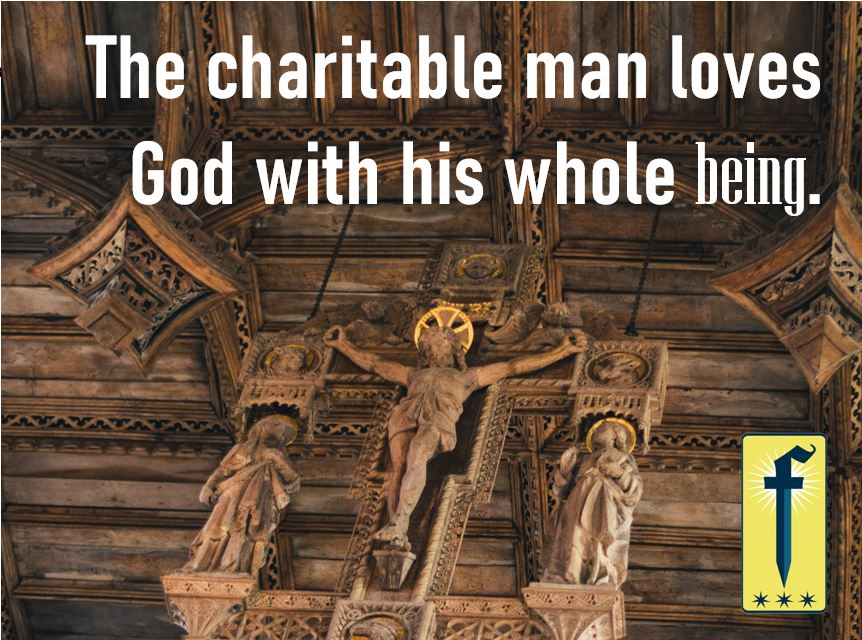 Henry Adams, the Virgin, and the Gift of Self

The force of charity is often lost on the modern American man. In American culture, even amongst Catholics, charity gets reduced to the dollars one puts in the collection basket or gives to a favorite (or annoyingly persistent) charitable organization. Sometimes, charity breaks free of this common mold and becomes a different, but still comfortable, idea: be nice to others, treat them with kindness and respect; love others for who they are. Charity, though, is not comfortable; it is the root cause of the Cross. Donating money generously is good. Donating money sacrificially is better. Treating others with kindness and respect is good. Loving others as God loves them is better. The challenge is in moving from being a “good man” to being a saint. Charity is both the means and the end of that movement.

History is replete with examples of charity drawing men and women to sainthood. There is a famous contrast, though, that summarizes the force of charity in history while challenging one’s own motivations in the present: the Virgin and the Dynamo, as contrasted in the experience of Henry Adams.

Faced with the sheer force of the mechanical wonders at the Great Exposition of Science and Industry in Paris in 1900, Adams pondered the dawning of “forces totally new. . . . Forces that were occult, supersensual, irrational” (The Education of Henry Adams, ch XXV, para 6, 7). He felt a certain attraction, even a natural inclination to worship, when in the presence of the most powerful man made instruments of the day. Yet, he recognizes that

“All the steam[-engines and dynamos] in the world could not, like the Virgin [Mary], build Chartres. . . . Symbol or energy, the Virgin had acted as the greatest force the Western world had ever felt, and had drawn man’s activities to herself more strongly than any other power, natural or supernatural, had ever done” (para 16, 17).

The Blessed Virgin Mary literally embodied Charity and, in doing so, became the cause and effect of the true, the good, and the beautiful expressed in the architecture, art, music and poetry of the Western world.

The “occult” forces that Henry Adams felt the need to worship in 1900 have only grown stronger today, but the Virgin remains greater, still. While man is enamored by his own instruments, charity can be reduced to dollars and societal niceties. While man is enamored by the Blessed Mother and her Son, the fire of charity burns in his soul and he becomes a saint.  God gave His whole Self in the Incarnation, becoming man.  Mary gave her all by receiving that gift perfectly and totally.  Men must choose to either love God or love something else, to paraphrase St. Augustine. In choosing charity — choosing to love God with his whole soul — a man embarks on the greatest of adventures with the greatest of endings.

From chapter 8 of The Introduction to the Devout Life by St. Francis de Sales:

And so, my child, say I to you. This miserable life is but the road to a blessed life; do not let us fall out by the way one with another; let us go on with the company of our brethren gently, peacefully, and kindly. Most emphatically I say it, If possible, fall out with no one, and on no pretext whatever suffer your heart to admit anger and passion. S. James says, plainly and unreservedly, that “the wrath of man worketh not the righteousness of God.”  Of course it is a duty to resist evil and to repress the faults of those for whom we are  responsible, steadily and firmly, but gently and quietly. Nothing so stills the elephant when enraged as the sight of a lamb; nor does anything break the force of a cannon ball so well as wool. Correction given in anger, however tempered by reason, never has so much effect as that which is given altogether without anger; for the reasonable soul being naturally subject to reason, it is a mere tyranny which subjects it to passion, and whereinsoever reason is led by passion it becomes odious, and its just rule obnoxious. When a monarch visits a country peaceably the people are gratified and flattered; but if the king has to take his armies through the land, even on behalf of the public welfare, his visit is sure to be unwelcome and harmful, because, however strictly military discipline may be enforced, there will always be some mischief done to the people. Just so when reason prevails, and administers reproof, correction, and punishment in a calm spirit, although it be strict, every one approves and is content; but if reason be hindered by anger and vexation (which Saint Augustine calls her soldiers) there will be more fear than love, and reason itself will be despised and resisted.

The St Curé of Ars sermon to lukewarm souls (get ready!)…

Video: 3 Min Video on the Theology of the Incarnation

Video: The Father that Gave All, the story of Thomas Vander Woude

Catechism 1889 Without the help of grace, men would not know how “to discern the often narrow path between the cowardice which gives in to evil, and the violence which under the illusion of fighting evil only makes it worse.” This is the path of charity, that is, of the love of God and of neighbor. Charity is the greatest social commandment. It respects others and their rights. It requires the practice of justice, and it alone makes us capable of it. Charity inspires a life of self-giving: “Whoever seeks to gain his life will lose it, but whoever loses his life will preserve it.”