The Faithful Man Honors His Parents 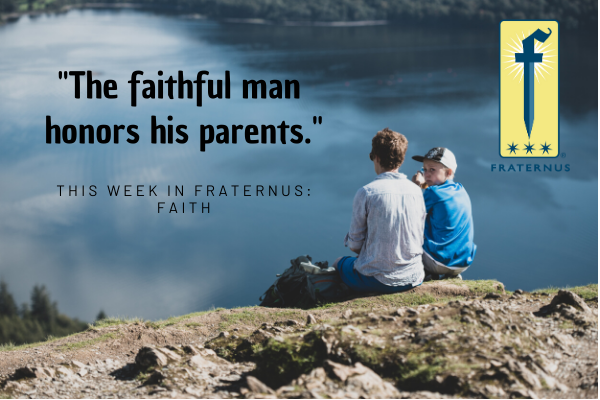 Honor your parents. Jesus did.

As in all things, Christ Jesus models perfection in fulfilling the commandment to honor thy father and mother. The Catholic man finds in the life of Jesus, and in the Lord’s reverence of Mary and Joseph, a model for honoring God the Father, honoring his earthly parents and a model for respecting earthly authorities.

Although the Gospels provide relatively small glimpses into the hidden life of the Holy Family, the glimpses are still rich with insight. In the second chapter of Luke’s Gospel, after having searched for the boy Jesus for three days, Mary and Joseph find Him in the temple amongst the teachers:

And he said to them, “How is it that you sought me? Did you not know that I must be in my Father’s house?” And they did not understand the saying which he spoke to them. And he went down with them and came to Nazareth, and was obedient to them. (Luke 2:49-51, RSV, emphasis added)

Jesus, the incarnate Lord of all, shows here that the divine plan includes humble deference to one’s parents. Even while He was about His Father’s work, even while His parents lacked understanding, Jesus subjected Himself to the discipline of obedience. Luke closes this passage with a parallel to the promise made in the fourth commandment: “And Jesus increased in wisdom and in stature, and in favor with God and man” (Luke 2:52). Obedience to one’s parents brings with it the promise of both spiritual goods (increase in wisdom and favor with God) and temporal goods (increase in stature and favor with man).

The commandment to honor one’s father and mother extends to honoring other earthly authorities who, by God’s will, have been made stewards of His goods. Jesus teaches His disciples, “Render to Caesar the things that are Caesar’s, and to God the things that are God’s” (Mark 12:17). By His life, the Lord shows that His followers are to live peacefully, not only with each other but also with the rest of civil society; this is the law of charity. Since all authority comes from God the Father, being “subject to the governing authorities” for the Lord’s sake, gives glory to God (Romans 13:1).

Honoring our parents is not only the fourth commandment, but is the beginning of the humility that reveals and submits to the authority of God and the good order of society.

Fr. Jarret Bede OP on the duties of children to parents (published as “Meditations for Layfolk” and “Classic Catholic Meditations”):

THE first duty of a child is to obey God through its father and mother. For that we have Divine warrant, and in the Old Testament we find that this is insisted on under the extreme penalty of death. The only limits put to this obedience on the part of children are the limits of wrong-doing : “To love, reverence, and obey our parents in all that is not sin.”  This strait subjection of the child to the parent, since it is the result of the natural bond between them, should, be a subjection which is softened and made easy by love. That is to say, the mere physical strength of the parent is neither the origin nor the measure of that obedience, but both are based upon a definite relationship which is absolutely different in kind to the mere relationship of guardian and ward. Consequently the sense of ungrudging allegiance must enter in as an essential constituent. The feeling is to be deeper than mere juxta position or dependence, and to be derived from an almost instinctive appreciation of each other s affection. Whether or not this affection exists emotionally should not make an appreciable difference to the duty. It is, unfortunately, a possibility to find parents and children sometimes at open war, due, apparently, as much to incompatibility of temper as to anything else an incompatibility arising often from sheer family likeness. But even so the child has duties of obedience to its parents, precisely because they are parents.

A psychotherapy expert talks about the breakdown of parental authority (note: not a Catholic author, some issues not addressed from a Catholic perspective)

To Whom Do Kids Belong?  A Defense of Parental Authority

Honor Your Father and Mother… Always?

Catechism 2199: The fourth commandment is addressed expressly to children in their relationship to their father and mother, because this relationship is the most universal. It likewise concerns the ties of kinship between members of the extended family. It requires honor, affection, and gratitude toward elders and ancestors. Finally, it extends to the duties of pupils to teachers, employees to employers, subordinates to leaders, citizens to their country, and to those who administer or govern it.

This commandment includes and presupposes the duties of parents, instructors, teachers, leaders, magistrates, those who govern, all who exercise authority over others or over a community of persons.