The Faithful Man is a Disciple of Jesus Christ 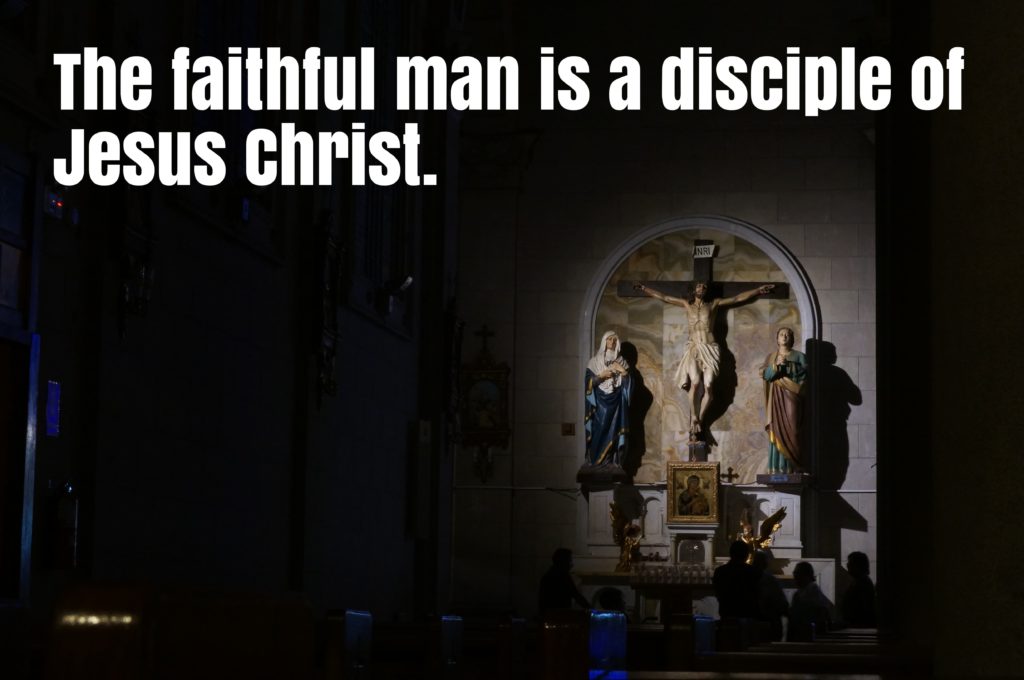 The opening from the Fraternus Book this week:

Faith comes from God and leads us to God. We go to God the Father through His Son, Jesus Christ. Therefore…

The faithful man is a disciple of Jesus Christ.

Interestingly, it is only after Jesus physically left His disciples (after the Ascension) that we see Peter and the disciples start to work miracles in Christ’s name in the book of Acts. St. Paul too went off in the desert to pray and to learn about and from Christ, and then he went out to preach with great effect. So, there is clearly power in being disciples even without the “bonus” of being physically present with Christ like the first disciples.

From this we learn two major lessons in being a disciple.

The first aspect of being a disciple is to learn by being present with Christ spiritually. The above examples seem to say this is the more powerful way, perhaps because it increases in us the virtue of faith, which we need in a life where we do not “see” God but trust in His power – “blessed is he who believes and has not seen,” says Jesus to Doubting Thomas.

We have to learn who Christ is, how He does things, and how we can imitate Him. Otherwise, we may be doing something contrary to what He desires and what is good for us. We can be with Christ in prayer and especially at Holy Mass and Adoration. We may not pick up on Christ’s facial expressions, but He is present and He does speak – only in stillness and prayer can we learn to hear. We can also hear what Christ said through the gospels, Sacred Scripture, the Liturgy, the Rosary and through our personal prayer.

The second aspect of being a disciple is to do as He did. As we grow in faith by listening, we grow in faith by acting on that faith. That is why it is so important to learn first. If you were trying to imitate a great baseball player you wouldn’t just go out and start throwing or hitting the ball any which way. You would watch tapes and see how he holds his hands, where he put his feet, how he follows through with his swing or throw. Then you would try to replicate that. It’s no good just watching his swing and not taking a swing. Acting in faith increases faith.

Receiving Christ by listening to Him regularly and then “enacting” Christ by imitating Him is something that happens in faith and is strengthened in repetition and practice. This life as a disciple, then, is not a set of principles we’re always reviewing to see if we’re getting it right. It is the seeking of a person Who interacts, corrects, nudges, and inspires us. Jesus is not an idea, but the Lord Whom we follow.

Helpful articles on this topic…

Jason Craig on what can go wrong with “discipleship” models

Benedict XVI on living as if God exists

And a note from the Catechism…

In Jesus Christ, the whole of God’s truth has been made manifest. “Full of grace and truth,” he came as the “light of the world,” he is the Truth. “Whoever believes in me may not remain in darkness.” The disciple of Jesus continues in his word so as to know “the truth [that] will make you free” and that sanctifies. To follow Jesus is to live in “the Spirit of truth,” whom the Father sends in his name and who leads “into all the truth.” To his disciples Jesus teaches the unconditional love of truth: “Let what you say be simply ‘Yes or No.’”