The Faithful Man is Strengthened by Brothers in Christ 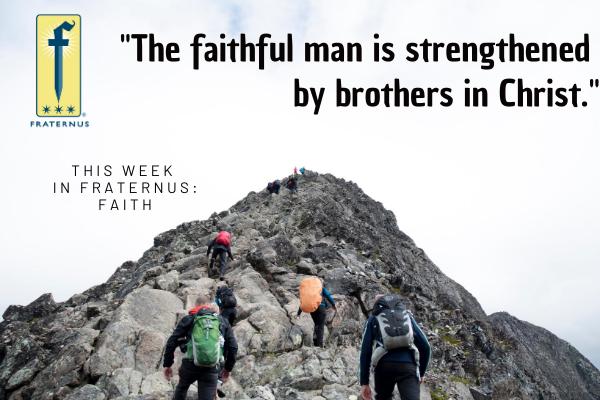 Dominion, Domination, and Your Need for Vulnerable Brotherhood

This article is an adaptation from Leaving Boyhood Behind (OSV, 2019).

Genesis, the beginning of the story of salvation, can be understood as a battle over the meaning of power. God created the entire world and then sets man “in dominion” over it. This world is not democratic but is assigned rulers. The fish and birds rule the sea and air, for example, and man rules it all as God’s most intimate cooperator, created in his image and likeness, and called to continue the creative element of a rational creature through work, naming animals, and having a family. Simple enough.

In this prelapsarian paradise (i.e. before sin), power is a gift from God, and to exercise that power is not a form of tyranny but of humble submission, because the power is only understood in relation to God’s supreme rule. Power is humility. To name an animal, as Adam does, shows he’s been given an authority (fathers give names after all), but there’s no delusion that by giving a name to something already created that he is now the creator and absolute sovereign over it.

Sin changes all of that. As the devil diverts our eyes from God and truth, we come to see the world and everyone in it with skepticism. Creation isn’t a gift given but a world of warring parties, where the strong are those that are able to gain power over a rivaling power. Dominion, in other words, gets distorted into domination. In order to have power you essentially try to ascend from a steward of God to being a god with total power.

This happens first within ourselves, when we come to decide what is right and wrong instead of submitting to God. Even with creation we now must battle as we work, thorns and thistles doing their best to thwart us. Within the home the headship of the man becomes a temptation for the woman, and the rule of a man within a home has the potential to be domineering and abusive. That is what is meant by Eve’s “desire being for [the] husband” followed by the reality that “he [the husband] shall rule over you.” In short, Eve will want to vie for headship with Adam, but he’s still the head. We hear that word “desire” again when Cain is set to killing Abel, when God says that sin has a “desire” for Cain. You see, when we try to grasp at power through sin and disobedience what is actually happening is that sin is dominating us. That’s why God says to Cain that he must “have dominion” over sins “desire” for him. Either you rule as man and be free or you are ruled as a sinner in the chains of vice.

This sheds light on Jesus’ proposal that for those that truly have authority must serve, and St. Paul’s paradoxical statement that he is strong when he is weak. When we submit to God totally, we regain our place of dominion – first over ourselves and the exercised in legitimate authority within our proper domains. Power comes from God and is given, like him, in fatherly care for our households, whatever that may be. The Gentiles, says Jesus, “lord” their authority over their subjects, but Christian authority will not be like that – it serves the good of the domain, like Adam did. Like the kings in the Gospel – Herod, for example – their rule is understood solely in terms of power and control; dominion falsely exercised as domination. The worldly ruler, therefore, is essentially insecure, because he must act as someone who’s power is not a gift but has been hard won and is held by the show of strength. Weakness is one step away from lost power and a worthless life

Having dominion as I’ve described is strengthened and perfected in brotherhood. The Book of Proverbs famously says that as iron sharpens iron, so men sharpen one another (cf. 27:17). What does this look like? Paradoxically, we gain strength in brotherhood especially by being vulnerable enough to show weakness. Men who are dominating often try to prove to other men that they have no weaknesses. Men in true brotherhood who have dominion are there for one another when they need it, meaning they admit they have needs. You can’t be there for someone if that someone never needs you, if you have no weaknesses. This is why it is in true need that true community is cultivated.

Humility not only helps us live as sons, but also as brothers, because it lets our brothers into the places where we are weak, so that, in our brotherhood, we can become strong. Jesus even promises to show up in unique ways when we are gathered in his name (cf. Mt 18:20), and we actually know we have arrived at true faith by living in brotherhood (cf. 1 Jn 3:14). By correction, encouragement, and affirmation, a real brother reminds us who we are, corrects us when we err, and picks us up when we fall. If we try to dominate our world by never letting on that we can be corrected, need encouragement, have weaknesses, and desire affirmation, and then we’ll never have brotherhood. The perfect have no need of brotherhood.

Brethren, if a man is found guilty of some fault, you, who are spiritually minded, ought to shew a spirit of gentleness in correcting him. Have an eye upon thyself; thou too wilt perhaps encounter temptation.

Lean on Good and Holy Friendships

Overview of Sebastian Junger’s book “Tribe” about our need and void of community and belonging (secular perspective with critical insights, easy read)

Naming the new secular creed: a religion of me (the opposite of brotherliness)

Catechism 1879: The human person needs to live in society. Society is not for him an extraneous addition but a requirement of his nature. Through the exchange with others, mutual service and dialogue with his brethren, man develops his potential; he thus responds to his vocation.