The Fortitudinous Man is Not Timid Before the World 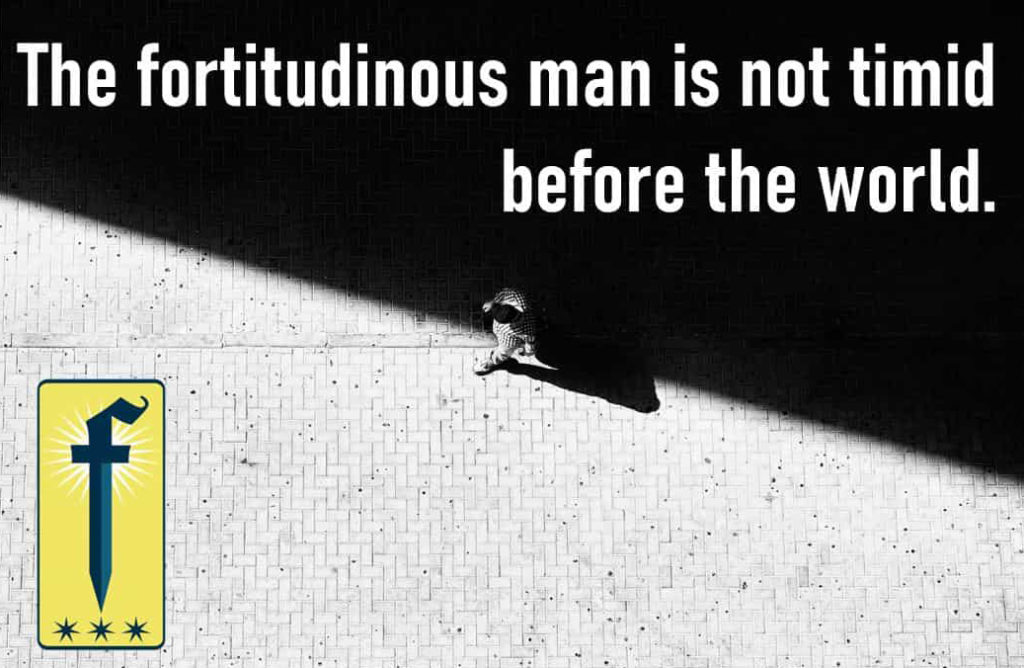 From the Fraternus Book for the 27th Sunday of OT:

Fortitude, sometimes known as courage, acknowledges something as fearful. But it also boldly faces that fear.

The fortitudinous man is not timid before the world.

In “average” men there is an understandable fear that Christians are wimpy.  To imitate Jesus, “meak and humble,” is hard enough, but the same Jesus also asks us to turn our cheek when struck.  Not to mention Jesus gave up His life in the end, without a fight – Peter was rebuked when he tried to fight back during Jesus’ arrest.  Is the “Christian man”, then, an oxymoron?  If manliness in its observable nature has a fighter in it, is it possible to fully embrace the Faith and its precepts? The answer is yes.  But not because we must deny the fighter in us by nature, but because we must see our true nature and the fighter in us “supernaturalized”.  True Christian fortitude is not merely peaceful living, but a real and dour combat.

Let’s focus on the fact of fear, especially as it regards the fortitude of a fighter.  Unless one has strength so immeasurably above an opponent as to not fear him (which is not really a “fight” at all), all fighting faces fear.  “Fearlessness” is not far from foolishness, which is why Aquinas places it in opposition to fortitude.  What the Christian fears above all is not to be hurt corporally or temporally, but eternally.  And, is facing this fear not a greater fear than facing an earthly foe?  “And fear ye not them that kill the body, and are not able to kill the soul: but rather fear him that can destroy both soul and body in hell” (Matt. 10:28, Douay).

Facing evil is not light – there’s a reason exorcism movies are terrifying.  If one rejects the doctrine of hell, of course, then this is silly, but if hell is real in its torment and eternity, then to fight the powers that come from and draw back to it is, literally, the fight of a lifetime.  By seeking the peace and justice of God, then, and even to seek non-violence in accordance with one’s vocation (like a monk), is not to give up on fighting, but to elevate the fight above the natural to the supernatural.  This is not to be less than a man, but, in a real way, more than one.

St. Thomas Aquinas explains this in his treatise on fortitude, where he points out that in the Old Law “there was need for the people to be taught how to fight, even in a bodily contest… But in the New Testament men were to be taught how to come to the possession of eternal life by fighting spiritually, according to Matthew 11:12, ‘The kingdom of heaven suffereth violence, and the violent bear it away’ (Summa II, II, Q 140 Art. 1).

We men in the natural vocation of marriage may have to defend life by fighting due to the nature of danger, protection, and fatherhood.  However, that is a sad state of a fallen world.  The desire in us that is greater than fighting is the desire for God, which means we desire peace.  As Augustine says, the end of war is peace.  And just as the clergy and religious, by their celibacy, remind us that there is more than the natural life, so too they remind us of more by their attention to the supernatural fight over any natural one.  Celibacy after all is not a denial of marriage’s goodness, but a sign that it is temporal and that there is more – a priest is living our future reality when we, in heaven, possess God fully, whereas marriage on earth is a sign of that future union.  Just so, non-violence in the saints, martyrs, clergy, and religious reminds us that there is more than the body and fighting for its preservation.  As Aquinas showed us, the New Law has transferred “the fight” from earth to eternity.

Our greatest source and inspiration for strength, then, will no longer come from earthly and natural heroes like soldiers and businessmen.  These men, for all their virtues, fight in an earthly arena.  (They can inspire, but not in the fullest sense of faith and usually by analogy for “higher” fights.)  Our greatest strength will be Christ and the saints that imitate Him, especially the martyrs.  The Maccabees and their forceful reclaiming of lost land are a wonderful inspiration, but we as Christians will always look more to the Martyrs of the early Church, who defy the world by being unbeatable.  Christ, in His death, was not defeated.  Nor were the martyrs.  They conquered.  Not because He – and all the saints for that matter – feared looking their enemy in the eye and fighting them, but because they did look that enemy in the eye and fight him.  And won.  That enemy was death, and he has been defeated.   One has to be standing tall to turn the other cheek.

And in our day, when the walls of secularism seem to be closing in on us, it is not the men dressed in black masks like ISIS that are the heroes, but the ones that can speak the truth boldly, with the love of God, and look the world square in the eye when receiving any one of the attacks from the litany of lies the world can pull from.  When we might face the loss of jobs and reputation, this is no light thing for a father.  At least in our place, and for now, we are not enduring physical harm, but it is clear we better get real used to being discarded for believing in truth, God, marriage, life, and so on.

In our darkest moments it is Christ that inspires us to fortitude.  As the book of Hebrews tells us, we follow a Messiah who has faced all we have faced, yet without sin, and when we face our fears and the enemies that assail us, we do so with Him as our greatest inspiration.

The courage of Jeff Liberty…

Video: Fr. Ripperger on what fortitude is and what it isn’t…

And a note from the Catechism…

2145 The faithful should bear witness to the Lord’s name by confessing the faith without giving way to fear. Preaching and catechizing should be permeated with adoration and respect for the name of our Lord Jesus Christ.