The Just Man is Kind 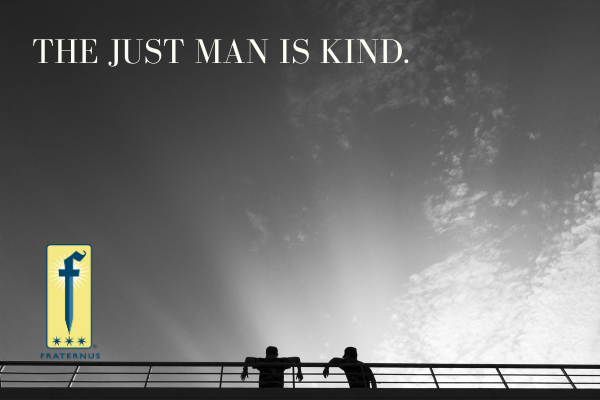 kindness is loving, but it's just too

Charity – or love – is not something that is essentially different from justice, even if we think of them that way.  Yes, there are times when it may seem we are being charitable instead of being just, but most often what is actually happening is that charity is going beyond what justice demands.

When Jesus tells us to lend to those in need in Luke 5:42, for example, we can say that the lending might actually be an act of justice, because God has created the world in such a way that all can have enough to be cared for.  If someone is without and someone else is full, then to help “balance the scales” is an act of justice.

Yes, charity goes beyond justice, but that doesn’t mean in contradicts it. Again, in the same passage as the one on lending, Jesus tells us to go beyond the demands of walking with a neighbor one mile like he asked to go with him two miles.  If someone asks for a coat, we are told to give him our tunic too.  Sure, we all know to love our neighbor, but Jesus wants us to love our enemy too.  These are the places where charity goes.

When it comes to the issue of kindness, especially in the way we speak to others, charity and justice are both considered.  In mentoring and fathering, it is essential that we teach the young to get out of their own heads to look beyond their feelings and desires, because it is in the way that something is received by another that matters, not why you feel like you were right.  And if our actions and words cause harm that is an act of injustice.  Manners can of course be charitable, but basic decency is not extraordinary.  When it comes to speaking with manners and kindness, we must grow in both justice and charity in order to speak well to others.

Regarding justice, if we think that we, because we have basic dignity, deserve to be spoken to and with without condescension or unwarranted coarseness, then we should offer that to others. Do unto others as you would have them do to you, and all that.  This is a matter of justice.  To speak with rudeness or terseness is essentially to “speak down” to someone, to claim by your actions that you are higher than they, that you can speak to them that way at all.  All acts of justice attempt to put another below us  – you can’t steal, for example, unless you are convinced that you are “due” that stolen good more than the one from whom you steal.  You must “lower” someone in your mind before you commit an act of injustice toward them.  Basic decency acknowledges basic dignity, and no one deserves unwarranted verbal violence anymore than they deserve to be stolen from.

But the realm of kindness is where we take manners, which can be considered as merely decorum in public, and realize that with our words, tone, and ways of speech that we can reveal the love of God.  It is, therefore, a result of charity, of the love of God and neighbor dwelling in us, that best preserves our speech from becoming coarse and rude.  St. Paul says our speech should be “seasoned with salt,” that we should avoid “unwholesome talk,” and “build up” through our conversations (Col. 4:6, Eph. 4:29).

We are called to love our neighbor in all things, and this means quite simply that our speech should be, as Peter says, with “gentleness and respect” (1 Peter 3:15).  The lessons and advice of the saints are replete with examples showing how dangerous a verbal slight can be if it turns someone away from the truth, and how powerful a word can be in its ability to encourage and enliven a burdened soul.  Some of us feel we “can’t help it” when our tongue lashes at a neighbor in irritation or frustration, but you can.  Like anything else, it requires discipline, but because words go unseen (unlike a stolen good) it can seem more innocent than it is.  It isn’t.  “If anyone deludes himself by thinking he is serving God, when he has not learned to control his tongue, the service he gives is vain,” says St. James (1:26).  Those are not minced words.

From the Summa Theologica of St. Thomas Aquinas:

An EXCELLENT read and summary of the virtue of kindness

Christianity – and all truth – comes most often by the force of interaction, not argument (quick read of the example of St. Augustine)

Catechism 516: Christ’s whole earthly life – his words and deeds, his silences and sufferings, indeed his manner of being and speaking – is Revelation of the Father.