The Just Man Works for Peace. 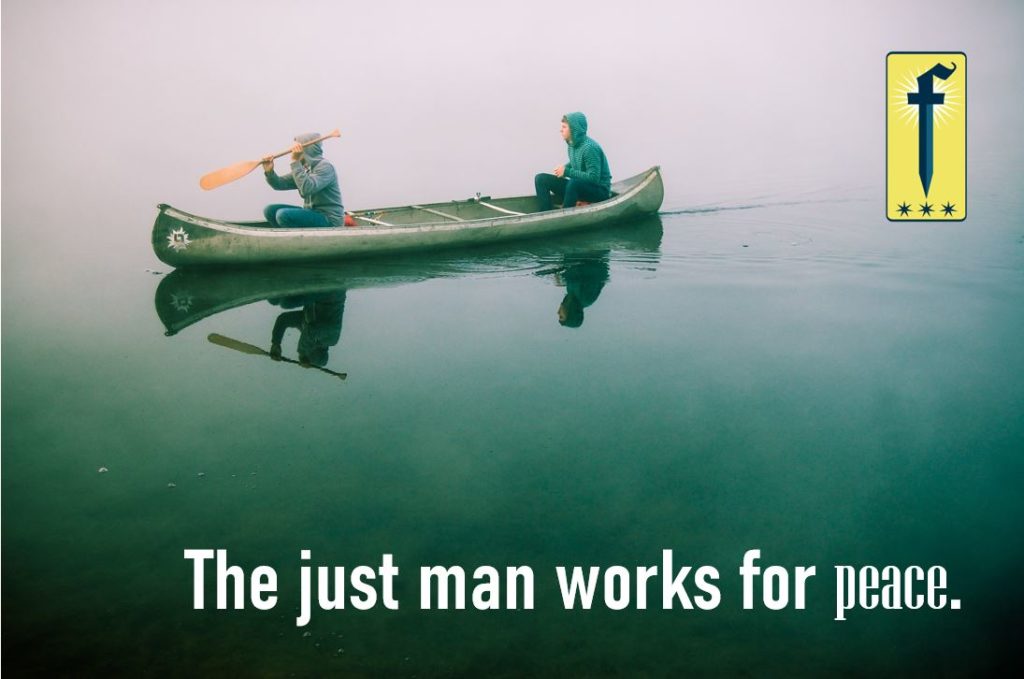 Justice is for Peace

I was once at a conference where a priest who happened to be a hand-to-hand combat expert was going to speak on spiritual warfare. “So, this is the guy,” said a skeptical and admittedly liberal friend, “who’s going to teach us about the Prince of Peace?”

Obviously, there’s some tension and reality in his quip, but it seems to me the average joe in the trenches of spiritual and even actual warfare (even if its just in the court of secular society) can relate to a priest who can fight more than a man who mocks him for being able to. But the point remains. St. Paul makes it clear we’re in a battle. Christ said he came to “bring the sword.” Therefore, isn’t it so that our prime identity is that of a soldier for Christ? Or, is it truer that we aim to at all cost give up even the imaginings of warfare for the sake of the abiding peace that is native to the order of grace?

The answer is yes, but it might also be no. St. Paul makes it clear that we are not fighting flesh and blood, but the powers of darkness. So, our battle is spiritual. But that does not mean that its hypothetical or imaginary, as if we Christian men leave the real fighting to actual soldiers and we hold up in pious conclaves of prayer, hoping for the best. Our fight is real. Hell is real. Sin is real. At this moment demons hover looking for an opportunity to change our course. And a central part of their tactic is to divide us against one another, taking peace away. We fight them, but at all cost we do not fight each other. Why? Because any man is a conversion away from heaven, but the demons are always bound for hell. Without qualification then we fight most vehemently for peace among men.

The virtue of justice is understandably linked to punishments and even violence. One might think of controversies around capital punishment for example. But we cannot forget that a just society is one at peace, and acts meant to bring back the balance of justice do not have the “violence” of punishment as their end, but to restore the peace lost through injustice. Remembering the end keeps us from abusing the means or making the means the end. Thus with St. Augustine we can say with clarity, “The end of all war is peace.”

In the truth of justice, we know that it is the duty of man to keep peace, and sometimes that means through force, as Genesis says clearly – “by man shall a [murderers] blood be shed” (Gen. 9:6). It is the duty of the state to punish wrong, reword good, and protect the innocent from the malicious (1 Peter 2:13-15).

For the society that is the Church, however, our aims are higher. By elevating justice through charity we work for the greater goal of conversion and peace. It is also clearly understood that justice will always have a say in the end, and we trust that to God. In the light of God’s Kingdom, it seems clear our focus is on rebalancing justice by overwhelming the world with peaceful service and charity. Our greater concern is our own injustices, not just the punishment of the wicked on earth:

Do not repay injury with injury; study your behaviour in the world’s sight as well as in God’s. Keep peace with all men, where it is possible, for your part. Do not avenge yourselves, beloved; allow retribution to run its course; so we read in scripture, Vengeance is for me, I will repay, says the Lord. Rather, feed thy enemy if he is hungry, give him drink if he is thirsty; by doing this, thou wilt heap coals of fire upon his head.[7] 21 Do not be disarmed by malice; disarm malice with kindness. (Romans 12:17-21, Knox)

So, let’s be careful to avoid a squishiness that avoid conflict and waters down truth and calls it peace. Real peace is much harder won than that, it’s worth too much to be that cheap. There will be no peace on the issue of abortion, for example. But in an age of endless and poorly defined wars, splintering terrorist groups, and even violence toward the unborn, the Christian man should seek peace with those around him. Christianity is the Word made flesh, so we don’t merely speak of global policies of peace (under the false presumption that peace is always a political problem to be solved). No, our peace is only in a godly order, because God’s thoughts of man are thoughts of peace (Jer. 29:11).

From the encyclical Libertas by Pope Leo XIII:

This, indeed, is true liberty, a liberty worthy of the sons of God, which nobly maintains the dignity of man and is stronger than all violence or wrong – a liberty which the Church has always desired and held most dear. This is the kind of liberty the Apostles claimed for themselves with intrepid constancy, which the apologists of Christianity confirmed by their writings, and which the martyrs in vast numbers consecrated by their blood.

CCC 2317:  Injustice, excessive economic or social inequalities, envy, distrust, and pride raging among men and nations constantly threaten peace and cause wars. Everything done to overcome these disorders contributes to building up peace and avoiding war…