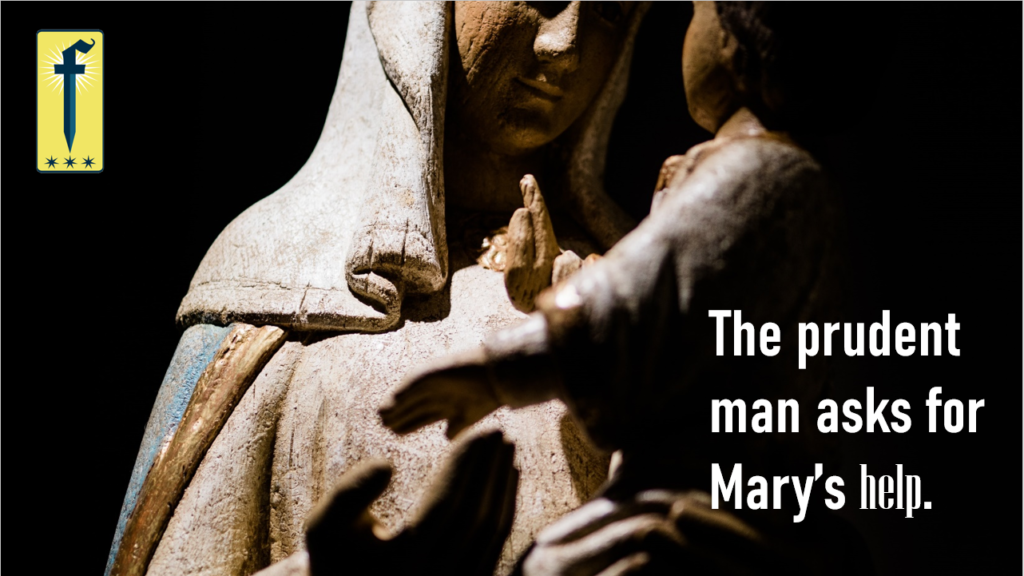 The Poverty of Marian devotion

Fulton J. Sheen once said that Marian devotion is so central to Catholic practice and history that one could say that being Catholic is to be devoted to Mary. Yet, we know this isn’t so. Tainted, perhaps by our Protestant friend’s views of Mary, we can share a suspicion that to go to Mary is to not go to Jesus, to choose her over Him. For every Hail Mary of the Rosary could you not be singing the praises and seeking the guidance of Christ? Does she not take at least something from Him?

For now, let’s set that question aside. Not because it isn’t important, but because it’s easy to answer, and I suspect it is not the real reason we avoid more robust Marian devotion. To answer the charge, let’s just say for now that we can see from scripture that God willed Mary to be our mother in an active sense (“…all generations shall call me blessed,” “…behold your mother,” etc.). And, Marian devotion is not some new idea untried. We have centuries of evidence that devotion to Mary brings holiness with it. The reason is simple: Mary cannot bring us anywhere else but closer to her Son – there is no other thing that devotion to her effects in us.

And, according to many of those holy men and women, it is not a fear of displeasing Jesus that we avoid the Marian element of our spiritual life, but pride. Mary’s humility is beyond (below?) what we picture when we picture greatness. Even if we’re formed in the Faith, our eyes too often see as the world sees. When we see the wealthy, strong, popular, talented, and so on, we see greatness. It seems the reason God sends His saints to such humble places (like Br. Andre, the holy doorman) is to remind us that the impulse to conquest and domination that seems natural to man is in at least some sort of conflict with the manliness we’re to live in Christ.

In Matthew 20 we have a series of events that drives this home. First, while Jesus is taking them to Jerusalem He tells them of His coming death. Right after this we hear of the sons of Zebedee asking, through their mother, to sit on Jesus’ left and right side when he enters His kingdom – they likely still think their will be an earthly throne. Then the other disciples get mad at the request (St. Jerome suggests in this passage that there was jealousy about who was present at the Transfiguration). With all of this happening, Jesus tries once more to tell us something that we have a hard time hearing: He came to serve, not to be served. The Gentiles “lord” their authority over others, He says, but Christians shall lower themselves under others. We are to actually seek the lower seat, the servant’s role, and even death for our brothers. Being “under authority” is a thing clearly praised in the Gospels, and, as Chrysostom says speaking about this verse, “to desire a place of honor is vanity.” We are very much like the sons of Zebedee.

With that in mind, we can return to Mary. It is precisely in her lowliness, in being totally emptied of vanity, that not only does she receive the Word, but that Word then raises her through the assumption and coronation beyond all creation as it’s Queen Mother. To follow the way of Mary is to follow her lowliness. But, again, things like poverty and servitude are antithetical to our obsession with being powerful, praised, profitable, and “leaders.” (I’ve always wondered how we can have a conference with hundreds of teenagers telling them how to be “leaders” under the guise of Christianity without wondering who exactly the Indians are going to be if the room is filled with chiefs.)

In a meditation on just one aspect of Mary’s humility, in relation to the Presentation, Fr. Edward Leen has this to say of Mary and Jesus’ poverty:

Poverty and lowliness are a hard election, a harder election than suffering, because they entail greater disabilities in the eyes of our fellow-man, even in the eyes of the good and high-minded amongst them. Poverty, no matter how one may wish to ignore the fact, does carry a stigma with it, and a certain shame… It is much easier to be dignified in suffering than in poverty. It was these very disabilities that weigh so heavily on the poor that determined the choice of Jesus [and Mary]. We are not surprised to find her coming to the temple bearing in her hand two doves – the offering of the poor… Is it not the instinct of the man who is well-to-do, even though he be fairly religious minded, to regard his less fortunate fellow-man as one who is not quite his equal as far as human values go? It takes all the force of the example of our Heavenly Mother to rectify in us this false view, this false attitude towards life.

Leen here is reminding us of how quickly we slip in to pride, in judging with the eyes of man and not God. This is why to go to Mary – to her example and her intercession – can be so disarming. We almost want to achieve greatness and holiness by effort and discipline, not cowering before a lowly girl. Sometimes we display through art something that is of course true, but perhaps displaced when we think in terms of devotion, when we see Mary in her glorious crown. More often in this life it will be Mary who takes us to humility, to the cross of Christ, and not places of worldly esteem and recognition. If we want to “behold our mother,” the cross is where we find her.

In the writings of saints like St. Louis de Monfort and Maximilian Kolbe, there is almost an efficiency in devotion to Mary. Go to her and she takes you to Jesus. But what saves of us from the sense of transaction is the fact of the devotion, that we lean into her – whatever the reason – and are drawn deeply toward her son. Sincere devotion to Mary cannot end in shallowness. This will mean a movement away from ourselves, our egos, and the images of greatness we conjure within. When we meditate on the Presentation, we gain a new wisdom and prudence in life, that it is true that God casts down the mighty and raises up the lowly. We might not see the truth of that in this life – at least without some serious sanctity – but it is true, nonetheless.

Therefore, not only do we approach Mary’s example in the Presentation, of a poor but perfect obedience to God, we seek to actually be the one in her arms being brought to the temple. Uniting ourselves with Christ, we find ourselves in that mother’s arms. If God Almighty can empty Himself of all semblance of worldly glory and put Himself against that motherly bosom, so can we. In realizing how great she is in the eyes of God, we can better realize how great it is to be emptied of the riches and niceties of the world’s. Only then can we take up the great motto of St. Louis de Monfort, that most devoted son of Mary, when he sums up all of life and the aim of all saints: “God alone.”

May Mary, Seat of Wisdom, be a sure haven for all who devote their lives to the search for wisdom. May their journey into wisdom, sure and final goal of all true knowing, be freed of every hindrance by the intercession of the one who, in giving birth to the Truth and treasuring it in her heart, has shared it forever with all the world.

St. Louis de Monfort’s “Secrets of Mary” Book (long, but broken into readable paragraphs – worth reading the intro at least).

Catechism971 “All generations will call me blessed“: “The Church’s devotion to the Blessed Virgin is intrinsic to Christian worship.” The Church rightly honors “the Blessed Virgin with special devotion. From the most ancient times the Blessed Virgin has been honored with the title of ‘Mother of God,’ to whose protection the faithful fly in all their dangers and needs. . . . This very special devotion . . . differs essentially from the adoration which is given to the incarnate Word and equally to the Father and the Holy Spirit, and greatly fosters this adoration.” The liturgical feasts dedicated to the Mother of God and Marian prayer, such as the rosary, an “epitome of the whole Gospel,” express this devotion to the Virgin Mary.