The Prudent Man Sees Things as They Truly Are 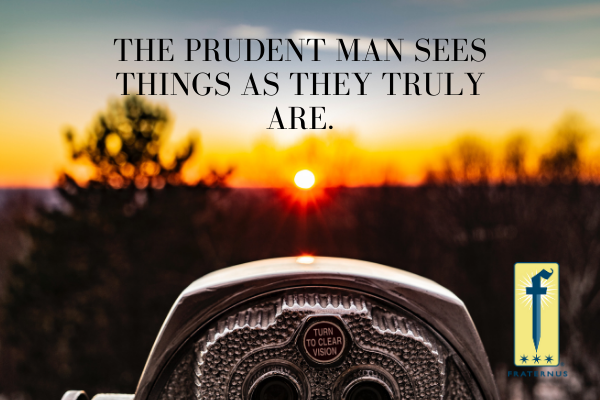 What do you see?

The process of education should not be called a process.  It is too organic for that.  This is easier to grasp if you know that what I mean by education is coming to the truth of things that we “know” in such a way that it becomes interconnected and almost intuitive – what we call wisdom.  If by education, you mean a sort of passage through the process of taking a child and their wonder and squaring them into a productive citizen in a meritocracy – we’re talking about different things.

No, education in Catholic eyes is primarily about wisdom and virtue.  There is place for data and technical training, but because a person is more than their utility, so too is education, because education is what we do for humans – programming is what we do to machines.  Our intellect is what we share with God and the angels and what we don’t share with the beasts or tablets.

Education, if it were to be classified away from ideas of knowledge-transfer and into virtue, would be prudence.

When we speak of the intellect and virtue, we are talking about prudence.  It is extremely helpful to consider prudence not merely as right acting, or even thinking – that comes next – but we should think of prudence as right seeing.  If you can’t see things as they are, receiving them and understanding them truly, then you cannot possibly decide on a good course of action, at least not with confidence and consistently good outcomes.

Without prudence – according to St. Thomas Aquinas – you don’t have any other virtue.  To be a “good” father or mentor or leader or – anything – requires you be prudent.  It is the virtue that translates what is within us to what is outside, it makes our grasp of truth or enactment of it.  And, without clear seeing, you don’t have prudence.

I am forever grateful of the advice I’ve heard spoken by Wendell Berry, not in one of his essays, but in an interview with his daughter about how he raised them.  One, he kept her humble, apparently by being a relentless teaser.  Second, he always told her to “look and see.”[1]  To look is to scan.  An animal, for example, looks constantly.  Sharks and snakes never blink – they have no eyelids – but they do not see anything, at least not in the way meant by Berry.  It is for man to see, which is the reason that man creates art, ponders his own existence, and knows that a monkey riding a tricycle is funny.

This might sound technical and esoteric.  Stick with it – I promise you’ll see the big picture.

To learn to see clearly with the intellect is the path to prudence because it makes sure that we (a) see things as they are and (b) see them within the whole and not as an isolated fact.  It can be good to see a fact in isolation, dissected from a specimen.  But dissected things are usually dead.  To make them alive again in the fullness of reality is to see them in their interconnectedness to everything else, to put it all together.  This is actually what the process of education is after, to help people see things wholly.  We “break things down” so that we can reunite them with a greater understanding, like when you take something apart and afterwards understand it better.  When we see it working, we exclaim “aha!”

That moment of “aha!” is exciting, and its usually exciting not because the piece of information is interesting, which it might be, but because it is another piece of the puzzle that lets us see more of the picture.  Isn’t it interesting that when we understanding some that before seemed too complex and disjointed, we don’t consider all the parts alone anymore, but say that we “see the whole picture.”  “Now I see!” is an outcry of understanding, even though what we actually “see” is something in our mind.  This is because, again, it is man that has an intellect and comes to “see” what is really there within his rational soul, that is, within his intellect.

So, when we see well we think well, and when we think well we act well.  That’s why there’s so much danger in have our vision obscured.  This happens in many ways.

First, we don’t pause to see the whole picture.  Have you ever turned your head and “seen” something that turned out to be something else?  Maybe the chair in the corner looked like a dog at first, or the open fridge door looked like a person in the kitchen.  This is because the mind tends to fill in things for our eyes so that we don’t have to analyze every drop of sense-data.  This is a good thing often enough, except when the vacuum with a shirt slung on it scares the crap out of you at night.

But, a grave danger occurs if something like this happens to us as icons and vessels of Christ.  What if we glance at a person and miss what God intends us to see – what is really there?  Instead of seeing the whole picture of a person we “see” something totally different, or only a portion of it and allow the rest to be filled in in some other way.

Christ, for example, has a conversation with the rich young ruler in Luke 18, who slowly reveals that he is a tad delusional when it comes to seeing his own “goodness” (“I keep all the commandments”) and failing to see how his wealth is tying him too tightly to this world.  At the moment he turns away after being prescribed a medicine he didn’t like, it says that Jesus “saw” him and became sorrowful, because He saw the whole picture (Luke 18:24).  We too can look at people, but do we see them as Christ did?

There’s the famous story of the two clerics who saw a prostitute.  One of them turned in disgust from the scandal of prostitution.  The other wept for her state.  The first one saw the scandal of prostitution, yes, but the second one saw the scandal and its effects on a soul beloved by God.  Other forms of blindness could be to miss love offered, or the gift of a friend, or their pain.  We can easily miss those that need our compassion the most, perhaps because we misjudged them or simply scan the world too easily without looking deeper into things.  For us men, often thrust into the roles of mentoring whether we know if or not, can fail to see what counsel is needed from us.  Jesus, again in the same story with the rich young ruler, does not offer broad advice for anyone, but offers that particular young man what he needed – to sell it all – because He saw the man and the whole picture.

This is why we as Christians always “see” with both prudence and love at the same time.  Prudence sees in so far as it is able, and love (charity) sees even further into reality with the help of a supernatural gift.  For a man with the eyes of a father, we see more clearly that our prudence is not merely an arrangement of things in good sense, but a critical aspect of being what we are, because the prudent man sees things as they are.

[1] This she says in an interview on the documentary by that name, Look and See, available for streaming in multiple places online.

From The Introduction to the Devout Life by St. Francis de Sales:

We do not necessarily judge because we see or are conscious of something wrong. Rash judgment
always presupposes something that is not clear, in spite of which we condemn another. It is not
wrong to have doubts concerning a neighbour, but we ought to be very watchful lest even our doubts
or suspicions be rash and hasty. A malicious person seeing Jacob kiss Rachel at the well-side,
or Rebecca accepting jewels from Eleazer, a stranger, might have suspected them of levity,
though falsely and unreasonably. If an action is in itself indifferent, it is a rash suspicion to imagine
that it means evil, unless there is strong circumstantial evidence to prove such to be the case. And it is a rash judgment when we draw condemnatory inferences from an action which may be blameless.

The story of Bishop Nonnus and the prostitute

A conservative response to cancel culture: prudence and seeing things as they are

Catechism 1806: Prudence is the virtue that disposes practical reason to discern our true good in every circumstance and to choose the right means of achieving it; “the prudent man looks where he is going.” “Keep sane and sober for your prayers.” Prudence is “right reason in action,” writes St. Thomas Aquinas, following Aristotle. It is not to be confused with timidity or fear, nor with duplicity or dissimulation. It is called auriga virtutum (the charioteer of the virtues); it guides the other virtues by setting rule and measure. It is prudence that immediately guides the judgment of conscience. The prudent man determines and directs his conduct in accordance with this judgment. With the help of this virtue we apply moral principles to particular cases without error and overcome doubts about the good to achieve and the evil to avoid.