The Temperate Man Denies Himself 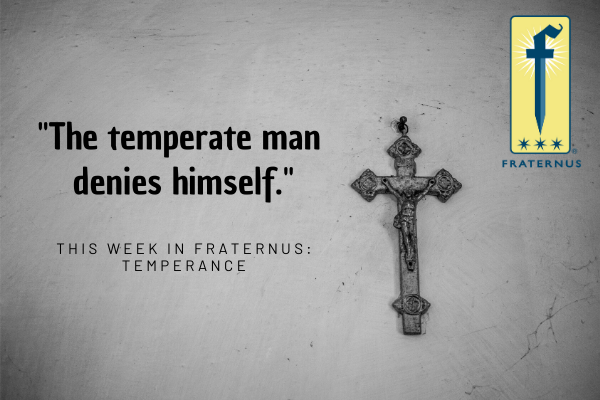 don't stay home from the battle

“If anyone would come after me, let him deny himself and take up his cross and follow me.” Matthew 16:24.

Brothers, it is clear from these words from our Lord that a necessary prerequisite to taking up our cross and following Jesus is to deny ourselves. But what do you think our Lord means by this? Are we to become nameless, walking around with anonymous name tags, denouncing our given name? If that was all that was needed it would be a simple matter to become a follower of Jesus, simply changing our name. Then we can take up our cross (whatever that might be) and follow Jesus. This sounds silly, and it is silly, because it is not what Jesus meant.

Jesus means to deny our wants, desires, passions, and so on.  In other words, it means saying “no” to what we want – whether that be licit or not.  In order to give ourselves in love, to say “yes” to love, we have to say no to self.  This is not limited to bad things, as I’ve said.  For example, if we don’t discipline the wants and desires of the body, especially the natural drive to food and sex, those desires can overtake our reason, become disordered, and enslave us to our passions.  This is what sin does – distort the goods of creation into the evils of sin.  By staying in control of our desires through discipline and denial, we do not allow them to rule over us.

A perfect example of this is David. At a time of the year when kings go forth to battle, David sent Joab and his servants and all of Israel to war against the Ammonites – but David remained in Jerusalem, an odd thing to do for a king back then. One afternoon while David was lounging around the castle he saw a woman bathing, and the woman was very beautiful. David’s passions were aroused and he took the woman Bathsheba and lay with her. Notice brothers that there is nothing in the story to indicate that there was any hesitation on David’s part. He was told that she was the wife of Uriah but that did not cause him any concern. He saw her and wanted her so he took her. By indulging his body – staying home from battle and lounging around – he prepares the ground for his explicit sin.  From this point forward there are severe consequences for this act of adultery.

To begin with, David seeks to cover up his adultery by bringing Uriah to Jerusalem hoping that he will lay with his wife. Uriah refuses to lay with his wife, so David decides he must be killed. First adultery, then deceipt and now murder (all stemming from unchecked passions). Then David takes Bathsheba into his house and she becomes his wife. He has denied himself nothing.

“But the thing that David had done displeased God.” 2 Samuel 11:27. God’s displeasure has life-long consequences for not only David, but also for members of his family. God tells David “now therefore the sword shall never depart from your house, because you have despised me, and have taken the wife of Uriah the Hittite to be your wife. Thus says the Lord, ‘Behold, I will raise up evil against you out of your own house; and I will take your wives before your eyes, and give them to your neighbor and he shall lie with your wives in the sight of this sun.’” From this point forward the consequences for David and his family are dire. The child conceived through adultery dies. Ammon (a son of David) defiles his sister Tamar. Absulom (another son of David) kills Ammon to avenge his sister. Rebellion breaks out between Absulom and David. There is more but I believe you get the picture.

We men, especially fathers, were made to rule.  God gave us a share in His dominion over creation and He gives different layers of authority.  That can all be undone and distorted if we don’t first have dominion within ourselves.  And this does not mean that we wait for sin to get a foothold and then we say “no” to sin.  No, this means that we say no to ourselves by fasting and penance before sin gets the upper hand.  And, if sin already has the upper hand, we can’t just focus on that sin, but must also deny ourselves in other areas.  Like David, we men can easily stay home from this battle, and we know the results.  Lent is a time to engage, to go out with Jesus into the desert to do battle with our enemy.  Yes, the enemy is the devil, but we know how well he can work through our passions, so we are also our own enemy.  This is why self-denial is no small matter.  It’s the means to enter the battle, and to win it.

On denying ourselves and taking up the cross, from Thomas a Kempis’ classic Imitation of Christ:

If you wish to enter into life, keep My commandments.

Temperance and Lent by Jason Craig (get temperance right… or fail)

Video: Is drinking a sin?  (21 min video, centers on temperance – sobriety vs. drunkenness)

Catechism 1809: Temperance is the moral virtue that moderates the attraction of pleasures and provides balance in the use of created goods. It ensures the will’s mastery over instincts and keeps desires within the limits of what is honorable. The temperate person directs the sensitive appetites toward what is good and maintains a healthy discretion: “Do not follow your inclination and strength, walking according to the desires of your heart.” Temperance is often praised in the Old Testament: “Do not follow your base desires, but restrain your appetites.” In the New Testament it is called “moderation” or “sobriety.” We ought “to live sober, upright, and godly lives in this world.”

To live well is nothing other than to love God with all one’s heart, with all one’s soul and with all one’s efforts; from this it comes about that love is kept whole and uncorrupted (through temperance). No misfortune can disturb it (and this is fortitude). It obeys only [God] (and this is justice), and is careful in discerning things, so as not to be surprised by deceit or trickery (and this is prudence).