The Temperate Man is Not Lustful 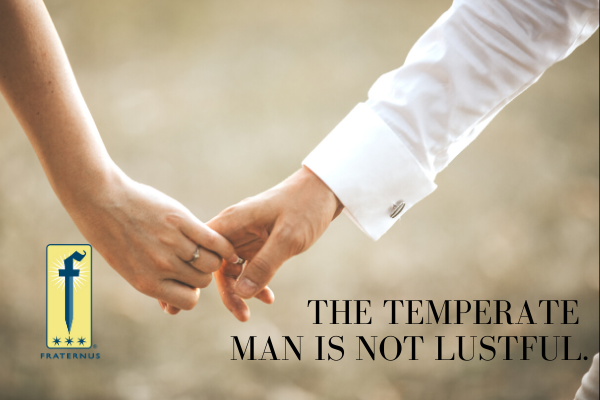 the other extreme of lust

(This squad time commentary may have to be adjusted for younger grades, but this message is still extremely important to convey)

Lust is something that all men struggle with to one degree or another. With the advent of the internet this has become a sin that is all too easy to fall into. Virtue is characterized by Aristotle as the mean between two extremes. So, in a sense, virtue is the balance between two vices. This doesn’t mean that virtue is exactly in the middle between the two, sometimes it can lean more towards one of the two.

Thus, temperance is an excellent virtue to moderate lust since lust is obviously the extreme of giving in to our passions. But what is the other extreme? Because this is sometimes overlooked, I would like to take a minute to see the virtue of chastity that is the mean between giving in to pleasure (lust) and another vice that could be called stoicism, or canceling out all passion and pleasure.

Epicureanism is a philosophical school that taught that pleasure was the highest good. While there are nuances to the actual school of thought, for our purposes here we are going to take this to mean giving in to whatever “feels good,” and in the case of sexual desires this means lust. Sound like today’s culture? Today there are so many slogans along those lines, “YOLO” (you only live once), “Love is love”, “My body, my choice.” It doesn’t take much to see that this road leads to a bad place. But it feels so good! The example I like to use is that of a lion tamer. In this case, the tamer lets his lion (the sexual desires and passions he has) run rampant. The lion eats anything in its path, men, women, small children, whatever slakes its hunger.

The sexual revolution of the 60s and the sexual confusion of today have led people to believe that anything goes. This creates people who are slaves to their passions, which constantly give them diminishing returns and push them to seek more and more intense pleasure. They are not free to choose anymore because they are pulled around by their sexual desires. This is a bad route, but it is the one that most people in the world take. As Christopher West puts it, it is the fast food diet, which is better than starving.

That brings us to the other side, the stoicism or canceling of sexual desire. This is also a vice. Yes, I said vice. This is on the opposite extreme of seeking pleasure at all cost. It can sometimes seem like a good thing to block out all carnal desires and passions, especially in the face of the blatant excesses of the culture today, but this is also a bad path to walk down. In this case the lion tamer chains his lion in strong steel chains and starves him. The stoic approach is to try to avoid the problem by avoiding the desires all together. In Buddhism there is a principle that pain is caused by desires, so all desires must be diminished or eliminated. This is not a Catholic view. If you try to starve a lion he is eventually going to go on a rampage and devour everything in his path, or destroy the tamer himself. In order to truly experience joy, you have to open yourself to the possibility of pain.

Desire is not bad, sex is not dirty, and erotic love, eros, is not evil. “Finally, beloved, whatever is true, whatever is honorable, whatever is just, whatever is pure, whatever is pleasing, whatever is commendable, if there is any excellence and if there is anything worthy of praise, think about these things.” (Phil 4:8) I think it is pretty much undeniable that God gave men a natural sexual desire for women. If not, there are a whole lot of industries and marketing campaigns that would be tanking right now. God created our passions and desires and he made them good, and good for us, when they are not twisted. The problem is when we let those passions run away with us and usurp our reason. Isn’t it fitting that God created us so that we reach the age of reason well before we reach puberty? It’s almost as if he planned for our reason to govern our sexual desires…

“Nowadays Christianity of the past is often criticized as having been opposed to the body; and it is quite true that tendencies of this sort have always existed. Yet the contemporary way of exalting the body is deceptive. Eros, reduced to pure “sex”, has become a commodity, a mere “thing” to be bought and sold, or rather, man himself becomes a commodity. This is hardly man’s great “yes” to the body. On the contrary, he now considers his body and his sexuality as the purely material part of himself, to be used and exploited at will. Nor does he see it as an arena for the exercise of his freedom, but as a mere object that he attempts, as he pleases, to make both enjoyable and harmless. Here we are actually dealing with a debasement of the human body: no longer is it integrated into our overall existential freedom; no longer is it a vital expression of our whole being, but it is more or less relegated to the purely biological sphere. The apparent exaltation of the body can quickly turn into a hatred of bodiliness. Christian faith, on the other hand, has always considered man a unity in duality, a reality in which spirit and matter compenetrate, and in which each is brought to a new nobility. True, eros tends to rise “in ecstasy” towards the Divine, to lead us beyond ourselves; yet for this very reason it calls for a path of ascent, renunciation, purification and healing.”

Certainly eros needs to be purified and redeemed, but let us not make the mistake of erasing it all together. Virtue requires that we use the passions and desires that God has given us and point them towards him. In our example of the lion tamer. Imagine a man who has his lion (which we are comparing to his passions and desire, especially sexual ones) perfectly tamed and trained. It does whatever he wants it to. It can walk with him, it can attack his enemies, love and protect those he cares about. This is the goal we seek as Catholic men, to tame our lion perfectly so it is in line with truth, goodness, and beauty.

St. Thomas Aquinas on the power of lust to overcome the powers of reason, from the Summa:

When the lower powers are strongly moved towards their objects, the result is that the higher powers are hindered and disordered in their acts. Now the effect of the vice of lust is that the lower appetite, namely the concupiscible [the desirable], is most vehemently intent on its object, to wit, the object of pleasure, on account of the vehemence of the pleasure. Consequently the higher powers, namely the reason and the will, are most grievously disordered by lust…

Take Up Your Cross (thosecatholicmen.com)

Catechism 2351: Lust is disordered desire for or inordinate enjoyment of sexual pleasure. Sexual pleasure is morally disordered when sought for itself, isolated from its procreative and unitive purposes.