The Temperate Man Goes on Retreats 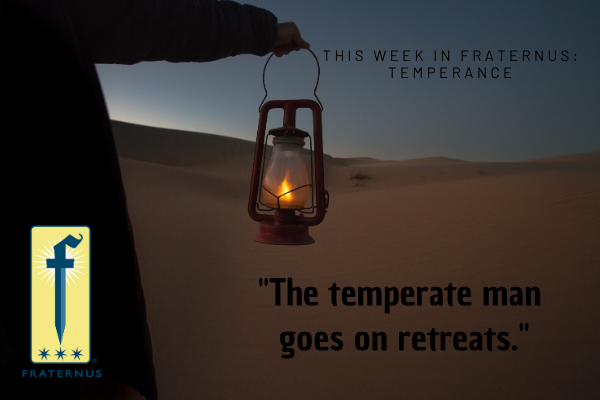 a good retreat is no date with god

St. Francis de Sales was ridiculed in his day because he did not preach in lofty sounding ways, sermons being sprinkled with glittering phrases in Greek and Latin, place just so in order to impress his audience. No, he spoke plainly, as a man acquainted with spiritual growth and battle, to men acquainted with the challenges of real life. In other words, he spoke to the common man and not the clericalism and showy circles that would have won him more accolades in his day. He now enjoys the reward for his love and humility, and we now have his legacy from which we can continue to learn and grow.

One of his greatest gifts to us that we can still receive is his spiritual masterpiece The Introduction to the Devout Life, which is in that category of “you cannot not read this.” After chapter upon chapter of practical and piercing advice about putting to death the old man and growing in the virtues of Christ, he ends his work suggesting that each person who has sincerely given themselves over to a life of devotion ought to see himself like a clock, needing to be wound twice daily and then totally broken down and reworked once a year. (Yes, his examples are often antiquated, but the point is clear nonetheless.) The daily “winding” is our morning and evening prayers, times where we refocus, reflect, and rededicate ourselves for God. The annual total breakdown of the clock is a yearly retreat, where you “renew your strength impaired by time.”

It is interesting that Christians borrow this term “retreat.” We know that the language of warfare is common in the spiritual life, because we are, in fact, in a war. The New Testament, particularly the words of St. Paul, borrow copiously from military vocabulary to describe our spiritual life – battles, armor, weapons, and so on. The New Testament, however, does not use the word “retreat.” That came later. Yet the Catholic Encyclopedia says retreats are “as old as Christianity…” If we strip ourselves of our inherited acceptance of the word, we might ponder that very fact and ask, “Why would Christians ever ‘retreat?’ We are not near defeat, we cannot be overwhelmed by those that oppose us, and the battle has already been won by Christ?” Should we use another word to describe what we mean by “going on retreat?”

The answer is of course a nuance, but it is one that helps us to see why de Sales recommended this annual practice. When we go on retreat, we are not actually “retreating” from the battle but entering it. We are withdrawing from the distractions of the world, yes, but not only to silence them, but to more thoroughly examine and discipline ourselves. This vision of a retreat seems to be rooted in the Church Fathers, especially the desert Fathers, who famously withdrew totally from the world to be God. This also ties it to Lent, which was especially formulated for new initiates in the early Church who would see it as a sort of 40 day retreat reminiscent of our Lord in the desert as well as the wandering people of God after the Exodus.

And we know this desert retreat was no “retreat from battle,” but entering into it, as famously demonstrated in the life of St. Anthony of Egypt, who seems to have literally fought with demons in the desert. In the example of our Lord entering the desert “to be tempted,” it is preceded with the words “Jesus was full of the Holy Spirit,” which anyone acquainted with the Old Testament knows means “being sent into battle.” Gideon, for example, has the Holy Spirit come upon him, and that is his power and inspiration for calling the people to battle (Judges 6:34).

This can help us, because often we view the spiritual life as a battle we’re immersed in more acutely when we are “in the world” with all it’s noise and temptations. True enough. But the battle is more intense when we are on “retreat” from that world, because there we find by examination and silence that our greatest enemy is not the temptings and trappings of the world, but our self. The simple guide that de Sales ends his book with helps us to see how easily we forget God, grow lax in discipline, and allow our hearts to wonder into false loves. I had a spiritual mentor who would repeat the phrasing of Oswald Chambers, the Protestant author of My Utmost for His Highest, “Prayer is not preparation for the battle; prayer is the battle!” In that sense, a retreat is not where we silence the battle in order to rejuvenate spiritually; it is where we are spiritually rejuvenated by entering the battle.

In Fraternus we focus on the idea of retreats during Lent and under the virtue of temperance, which is the cardinal virtue that orders the inner man by disciplining and directing the senses. Seeing it as a discipline of the body and passions helps us avoid the notion that it is some sort of mini-vacation wrapped in piety, a sort of relaxing date with God. Sure, there are elements of resting in God and allowing Him to comfort us. He does that. But when the desert fathers “retreated” it wasn’t for rest, but for the active and intense battle against the self, against the old Adam that attempts to displace and distract our devotion to God. A retreat, then, is not admittance of defeat, but the assurance of victory as we wage war on that which can bring our ruin, the subtle, self-justifying sinner that has yet to be defeated inside of us. That sly devil seems to be one of those ones cast out “only by prayer and fasting,” which sounds a lot like a good retreat.

St. Francis de Sales on the annual retreat, from The Introduction to the Devout Life:

The first point in these exercises is to appreciate their importance. Our earthly nature easily falls away from its higher tone by reason of the frailty and evil tendency of the flesh, oppressing and dragging down the soul, unless it is constantly rising up by means of a vigorous resolution, just as a bird would speedily fall to the ground if it did not maintain its flight by repeated strokes of its wings. In order to this, my child, you need frequently to reiterate the good resolutions you have made to serve God, for fear that, failing to do so, you fall away, not only to your former condition, but lower still; since it is a characteristic of all spiritual falls that they invariably throw us lower than we were at the beginning. There is no clock, however good, but must be continually wound up; and moreover, during the course of each year it will need taking to pieces, to cleanse away the rust which clogs it, to straighten bent works, and renew such as are worn. Even so, any one who really cares for his heart’s devotion will wind it up to God night and morning, and examine into its condition, correcting and improving it; and at least once a year he will take the works to pieces and examine them carefully;–I mean his affections and passions,–so as to repair whatever may be amiss. And just as the clockmaker applies a delicate oil to all the wheels and springs of a clock, so that it may work properly and be less liable to rust, so the devout soul, after thus taking the works of his heart to pieces, will lubricate them with the Sacraments of Confession and the Eucharist. These exercises will repair the waste caused by time, will kindle your heart, revive your good resolutions, and cause the graces of your mind to flourish anew.

Video: Fulton J. Sheen on retreats and adoration (“Can you remember any resolution that you ever kept?”)

Fr. George Rutler on the tactical retreat (short read that shouldn’t be skipped)

Catechism 2730: In positive terms, the battle against the possessive and dominating self requires vigilance, sobriety of heart. When Jesus insists on vigilance, he always relates it to himself, to his coming on the last day and every day: today. The bridegroom comes in the middle of the night; the light that must not be extinguished is that of faith: “‘Come,’ my heart says, ‘seek his face!'”