The Faithful Man Cultivates His Intellect. 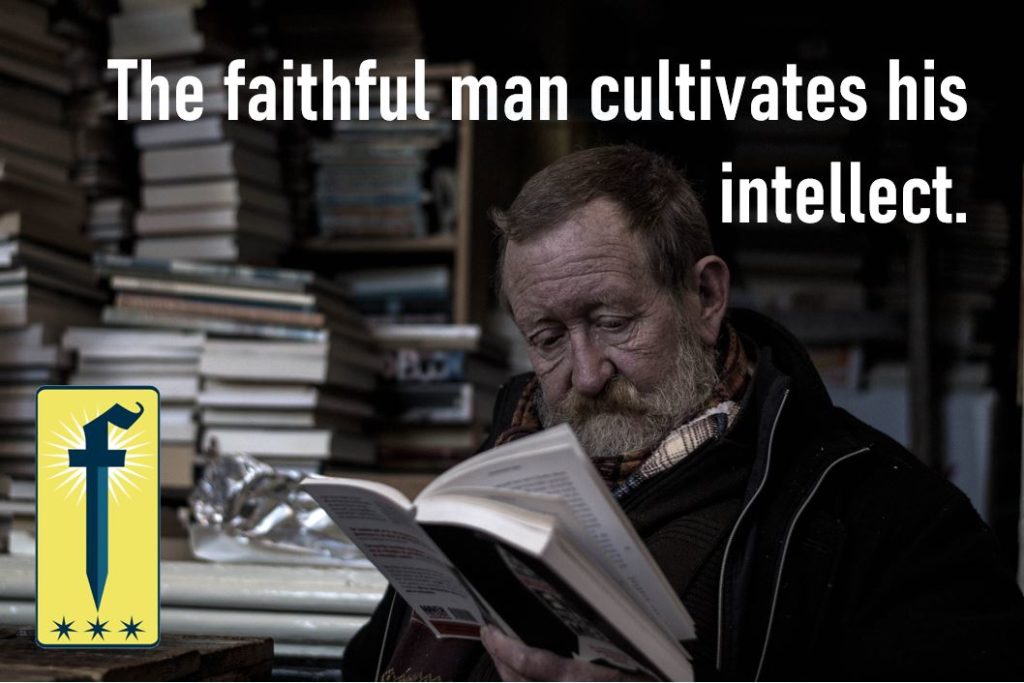 The opening from the Fraternus Book this week:

Faith requires knowledge. God gave us a mind and expects us to use it.Therefore…

The faithful man cultivates his intellect.

Rest, Reading, and Remembering to be Human

Rest, Reading, and Remembering What a Man Is

It is said the most valuable and hoarded treasure of the modern world is information.  Most of this seems to be in the form of what we call “data,” but there’s also the ambiguous word of “content” that fills our screens and servers.  But, paradoxically, it seems our oceans of information have made us shallower in thinking.  We are storing facts, but not absorbing truth.  For the Christian this is not an option.  Life cannot be reduced to facts but must mature into the love of wisdom.  Wisdom is hard won, but only fools despise it (Prov. 1:7).  We understand the intellect as a gift from God, and He expects us to use this gift.  Certainly, the mind is more than a tool to decipher data in order to dominate the world and decide on investments.

As St. Paul said, the very way to reject the world is to cultivate the intellect which leads to knowing the will of God:  “Do not be conformed to this world, but be transformed by the renewing of your minds, so that you may discern what is the will of God—what is good and acceptable and perfect” (Rom. 12:2).

And “the mind” is more than the physical brain.  The human intellect is a veritable bridge between the soul and the body, between heavenly and earthly realities.  Our intellect and will are the things we share with the angels and God Himself – the mind distinguishes man from the beasts.  And while the mind helps us to procure the necessities of life, like food and shelter, these “lower things” are not its primary food.  The mind longs for truth, the honorable things of life.  And, yes, truth can be “applied,” but it doesn’t have to be in order to be worthy of our attention.

Do not think, however, that this means we just have one more thing to tack on to an already busy schedule.  The opposite is true.  Learning to learn is oftentimes learning to rest.

Josef Pieper, famous for his writings on leisure and realism, notes that when God gave the commandment about the Sabbath, He commands that we “remember the Sabbath and keep it holy.”  That one word tells us that before there was the commandments and laws of the Sabbath, there was something pre-existing about this divine rest, something imbedded in us as humans, and apparently something we can forget.

At the creation of the world, it is interesting that God creates man in His image and likeness on the sixth day, and then “rests” on the seventh.  God’s “Sabbath” happens on the heels of the creation of man, almost like His first act as our Father was to show us something essential to being made in His image.  On the Sabbath when God and man “rest” together, creation keeps up its work – the waves keep crashing, birds keep flying, and the sun continues its march.  Other creatures are like us in being creatures, but they are not like us in being made in the image of God and able to enter His life by entering His rest.  “For we who have believed enter into that rest” (Hebrews 4:3).

This tells us that there is a relationship between man having an intellect and will and man being commanded to rest.  We share the burden of bodily toil with the other creatures, but we have a special freedom in being able to have our bodies on earth but our thoughts in heaven.  So, it seems that part of the gift of the Sabbath is to remind us that while earthly concerns are legitimate they are not the ultimate end of man and must be “checked” back into their place lest they burst their damns and flood our whole existence.  Pieper called this the “world of total work,” where work becomes the end and sole occupier of human capacity, when “work mode” becomes our only mode.  We were made for more than that, which it seems is part of the reason God directs us to rest our bodies and occupy our souls.  As Pieper also said, man works so that he can have leisure (rest), he doesn’t have leisure so that he can have the energy to get back to work.   Work was made for man, not man for work.

In our day we live between a tension between pleasure and usefulness.  “Work hard and play hard,” is the motto, which leaves almost no room for the reflective rest where our intellect wakes up, the kind presumed in the Sabbath commandments.  Working hard focuses on things that are likely worthwhile, though maybe to an extreme in our day.  Playing hard seems to mean indulging in pleasure to sort of “balance out” the rigor of work.  This is just not a human approach to things.  Neil Postman thought that the pleasure-seeking was a serious temptation that would lead us not just to being stupid, but to being controlled through our failure to regulate ourselves and to apply ourselves to worthwhile learning.  Here’s his comparison of Orwell’s 1984 and Huxley’s Brave New World, which he thought better showed us that it was our “love” of pleasure that would be our ruin:

The etymology of “amusement” actually shows that it is opposed to deep thinking.  It literally means to “divert the muse”, a muse being one that ponders.  It seems to have originally been used as a military term of distracting the opposing soldier.  The message: you can’t fight the world’s influence while binging on trash and distraction.

When it comes to the act of cultivating the intellect, there is simply no substitute for rest and reading.  St. Paul says to the Philippians: “[W}hatever is true, whatever is honorable, whatever is just, whatever is pure, whatever is pleasing, whatever is commendable, if there is any excellence and if there is anything worthy of praise, think about these things” (Phil. 4:8).  The mind needs to eat.  We need to read.  Other translations of Philippians 4:8 say to “fill your minds” with these things.  My favorite translation – Ronald Knox’s – says to “let these things be the argument of your thoughts,” insinuating a sort of inner conversation about noble things.  Many of us have likely had “arguments” in our thoughts that were unholy – ways we could have turned an insult back on an enemy, ways to show our spouse we were right, or plans to gain more praise from man.  But Knox likely had in mind the conversation that can happen inside of us between the mind, the conscience, and God.

Ruminating on the good, true, and beautiful doesn’t just give us thoughts pleasant to ponder, but it acts as a unique means to commune with God Himself.  This is why the faithful man cultivates his intellect.

Helpful articles on this topic…

Why read the Sword & Spade magazine?

And from the catechism…

“Faith seeks understanding“: it is intrinsic to faith that a believer desires to know better the One in whom he has put his faith, and to understand better what He has revealed; a more penetrating knowledge will in turn call forth a greater faith, increasingly set afire by love. The grace of faith opens “the eyes of your hearts” to a lively understanding of the contents of Revelation: that is, of the totality of God’s plan and the mysteries of faith, of their connection with each other and with Christ, the center of the revealed mystery. “The same Holy Spirit constantly perfects faith by his gifts, so that Revelation may be more and more profoundly understood.” In the words of St. Augustine, “I believe, in order to understand; and I understand, the better to believe.”