The Hopeful Man is Magnanimous 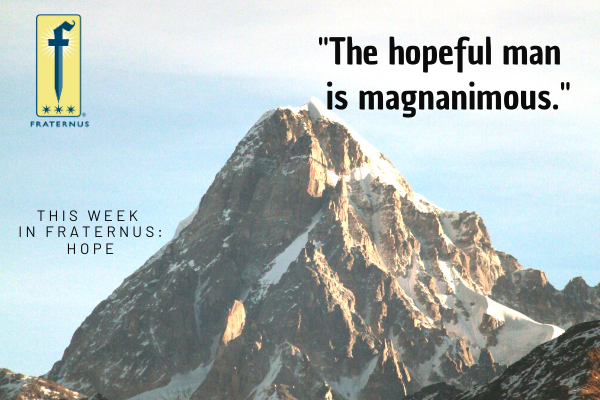 The historic timing of Jesus’ coming was not random. He came, as Scripture puts it, “in the fullness of time” (Gal. 4:4). What does that mean and why might God have chosen that time over others?

Let’s put it into a broader context. The moment of Our Lord’s coming was when many currents of world history were coming together, specifically the civilizational and philosophical achievements of the Greeks and Romans, and a tiny and apparently insignificant people called the Jews, who themselves had been subjugated largely to Roman rule and heavily “Hellenized,” meaning they had received and adapted many insights and ways of Greek philosophy and language. The New Testament authors and even Jesus, for example, quote a Greek translation of the Old Testament called the Septuagint, meaning the Greek Old Testament was common in religious works and life in that time, perhaps more so than Hebrew, the language of the Jews.

Bringing this all forward a bit, we can note that our society today is still in a way “Greco-Roman,” since we govern largely through democracy (credited to the Greeks) and republicanism (credited to the Romans). We also are still heavily informed by their philosophy and even art. But we should note, that has all arrived to us through the work and lens of Christianity – it was monasteries, after all, that preserved the classical works. Also, our moral and religious underpinning is tangibly and obviously Judeo-Christian in our reverence for the dignity of man and the excellence of virtue. Even the “two lungs” of Christianity in the East and West and known as “the Latin Church” and “the Greek Church.” In short, the intersection of faith, politics, and thought were truly at a “fullness of time” in the time of Christ, and compared to the rise and fall of so many other empires, we can see why history itself is a testament to God’s loving hand offered to sinful man. Like all of creation, history is not random happenstance. Many even saw the vast highways built by the Romans as an essential tool in fulfilling the commands of Christ, because so many evangelists would use those roads to bring the Gospel to the ends of the earth. God knew we would need those roads to fulfill the command to spread the Good News.

Christianity brought the classical world a whole new paradigm, however, by proposing that the true and highest King only found his eternal glory by wearing a crown of thorns and “sitting” upon the throne of the cross. Like all times, the ancient world was a place where men desired and sought greatness, however they understood it. Christ offers a whole new level of greatness by being “like God,” which is obviously what so many rulers wanted, to be a god. Yet, somehow, this greatness was not in ruling and owning, but in service and renouncing goods – it would appear that we would have to act in ways that seem opposed to greatness in order to reach it, like turning right in order to go left when a car is drifting in a turn. In other words, Christ affirmed our desire to be divine, but imposed a means to reach this greatness wholly un-intuitive to our fallen nature. The path to greatness was now unyielding humility. He who would be the greatest must become the least of his brethren. This strangeness is well-known to us, but we too easily overlook how paradoxical it seems.

Some historians say that in the later ages of Christendom owe much to the union of Paganism’s desire for greatness (think Caesars and military heroes) and Christianity’s demand of humility, giving us our heroes, our great men. To Christians, to be great in the affairs of this world and to square that greatness within the truth of God is known simply by the word virtue.

A further definition of this virtue of greatness, so informed by both reaching greatness and seeing ourselves in the light of truth (i.e. humbly knowing we depend entirely on God), is specifically the virtue of magnanimity. The magnanimous man is one who reaches forth his mind and body towards great things, not wasting time and energy on trifles and base pleasures. He does not flirt with many petty goods but identifies and seeks the highest and best goods. Aquinas is careful to note that magnanimity is not opposed to humility, because, in essence, it seeks things that are worthy of honor in both man’s eyes and in God’s eyes. To know if an act or achievement is magnanimous, we can consider just that: would both man and God be “impressed?” I cannot help but think of those words spoken when Jesus was growing into manhood, that he grew “in favour with both God and with men” (Luke2:52).

In Fraternus, we look at magnanimity in the light of hope (though it is technically categorized under fortitude, because it requires endurance in the face of hardship), because hope is a virtue that keeps in mind our life on earth, but always in relation to our final end, the vision of God in heaven. God has called us to Himself, and in this life, He has called us to “be perfect” and to live a life of greatness that reflects our nobility as literal royalty, sons of the King and Father.

We offend against our own calling, therefore, when we seek lesser things, trifling things, or when we think things are too hard and, therefore, leave great deeds unsought and undone. Informed and buoyed up by hope, we seek higher things, not lower. Aquinas notes that this doesn’t just mean things of “honor,” but “great honor.” For us this does not mean “shooting for the sky,” but shooting for heaven. We seek great honors, therefore, in humility and knowledge of our own finitude and limitations, not projecting a faux “greatness” or feigning virtue by flattering ourselves and others with empty acts and sloppy work hidden under prattling excuses. In this, we honor that which we received from so many great men of the past, even those that came before Christ, and that which we received from our faith itself: that our desire for greatness is good, but is only reached in relationship to our life as sons of God redeemed by a crucified King. Magnanimity, therefore, is a virtue of fortitude, yes, but hope as well.

Called to Greatness, the virtue of magnanimity, by Ted Sri (easy read)

6 min sermon on humility vs. magnanimity (c’mon, you’ve got 6 minutes!)

Catechism 1996: Our justification comes from the grace of God. Grace is favor, the free and undeserved help that God gives us to respond to his call to become children of God, adoptive sons, partakers of the divine nature and of eternal life.