The Just Man Does Not Demand More Than He Deserves 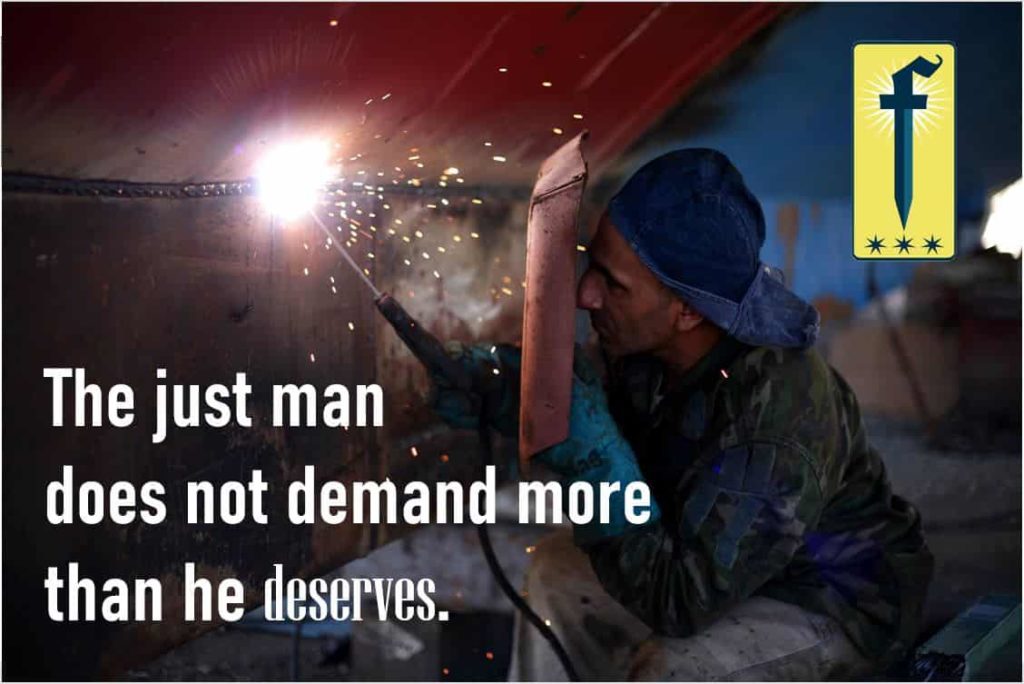 For the man who humbly lives in the created reality of God, justice is not merely the right ordering of society, but his delight.  “Precious store there is and good cheer where justice dwells” (Proverbs 21:20, Knox).  In the broadest sense, justice is everything “right.”  (The Latin root jus means right).  “Justice is every virtue,” said Aristotle.   “Justice is a certain rectitude of mind whereby a man does what he ought to do…” (Aquinas).  And justice always refers to actions and how they affect others.

Justice is based on the equality of man as creatures of God.  This is why justice in its fullest sense cannot be claimed by an atheists, since they deny the foundation of our equality, the Creator and Judge of justice.  The famous atheist philosopher Fredrick Nietzsche understood and accepted this, unlike modern secularists, and contended that the future of the human race “unchained” from theism had only one option – the will of some men over others.  Without God, there could be no justice and no foundation for morality.  “This world is the will to power–and nothing besides!” said Nietzsche, “And you yourselves are also this will to power–and nothing besides!”  The Catechism describes this condition, which has been a temptation since the fall of Adam and Eve, as “a spirit of domination” (CCC 1606).  Without justice, one must dominate another.

God made man equal, but the unjust man denies this equality and makes himself above the oppressed.  The Golden Rule, which in the hands of a charitable man is a guarantor of a sublimely beautiful world, is at the minimum a rule of justice.  Though man commits injustices, he never desires an injustice toward himself.  If he followed the Golden Rule he would cease to commit injustices.  An acute example is the injustice of lying.  Men naturally seek truth.  Liars, like all men, want to know the truth, but by deceiving their neighbor deny him that equality – they steal it.  Again, we see that he lacks integrity (the “wholeness” of belief and action) or he believes himself to be above others (“I deserve justice by right of my superiority over those who do not deserve it from me”).  “Only a person convinced of his essential superiority over others can consistently and willingly lie to them, deceive, mislead, and manipulate them,” says Douglas McManaman, “To lie to a person is to exercise a kind of lordship over him (a domination).”

Besides the “positive” acts of lying and cheating, we might also lay out the opposite, the desire that more be given to you than you deserve.  A spirit of “entitlement” easily falls under the sin of injustice, ironically since it often comes from those who claim to be seeking justice.  In short, justice expects what is owed – what is “due” our neighbor. The entitled seek out things that they perceive are owed to them but do little to discern if they have created the “imbalance” of justice that requires they be given a return of something – i.e. do they really deserve something because of their actions or just because? But, more often, we can find this spirit in the immature and boyish, those that are essentially spoiled and want the world to care for their needs more than they want to care for the needs of the world.

Again, we see the asserted inequality, that the spoiled man sees himself as more deserving, or at least expecting, of special treatment, no matter the level of his labors or focus.  The unwillingness to sacrifice and the desire to be served is a vice that Aquinas called “effeminacy,” which doesn’t mean to be “womanly” (since women are not by nature non-sacrificing), but as a lack of sacrificial manliness.  This is why laziness and the desire to be given more than is due is so ugly.  It’s literally opposed to who we are as God’s sons.

From the spiritual classic Cleaving to God by St. Albert the Great:

For this reason let us strive with the whole strength of our desire to consider ourselves the lowest of all and to consider ourselves unworthy of any favour. We should strive to be displeasing to ourselves and pleasing only to God, while regarded as low and unworthy of consideration by others. Above all not to be moved by difficulties, afflictions and insults, and not to be upset by those who inflict such things on us, or entertain evil thoughts against them or be indignant, but to believe steadfastly and with equanimity in all insults, slights, blows and dereliction that it is only appropriate.

For in truth he who is really penitent and grieving before God hates to be honoured and loved by all, and does not try to manipulate things so as to avoid being to some degree hated, neglected and despised right to the end, so that he can be truly humbled and sincerely cleave to God alone with a pure heart.

Catholic Encyclopedia on the Virtue of Justice

1836 Justice consists in the firm and constant will to give God and neighbor their due.