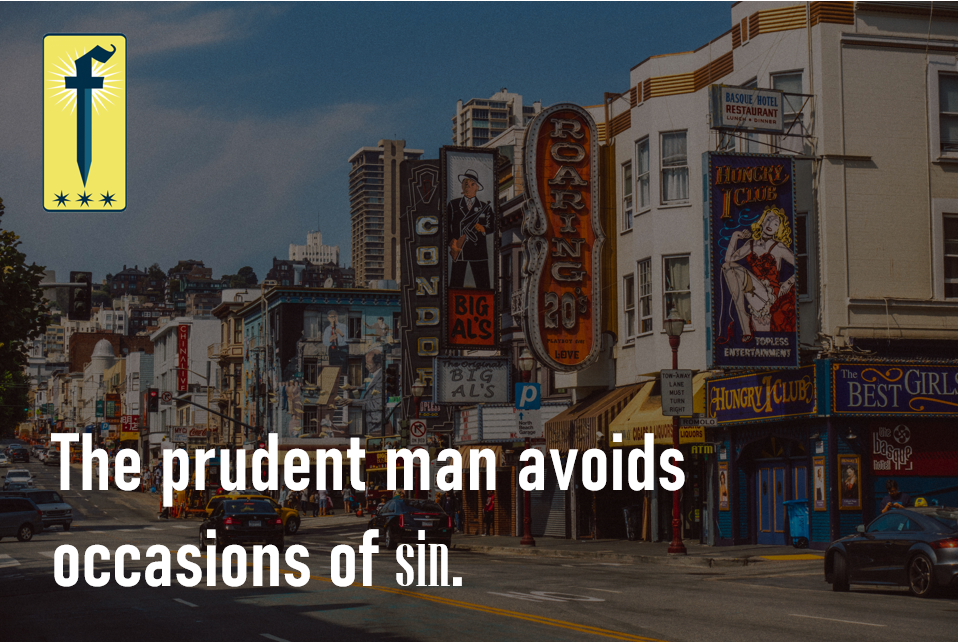 Of Pickup Lines and occasional temptation

There’s a classic pickup line that, I presume, was actually used by someone, somewhere. Although, I’ve only heard it in comical, cynical, or cliché scenes in movies. That line is, “What is a nice woman like you doing in a place like this?”

The question is loaded. (Imagining the scene in a bar makes me think other things might be loaded.) It seems to say, “You look like a decent person who does good, but this is an indecent place that does bad things to people.” The person asking the question doesn’t seem to mind the “bad” that the place might lead to, but he’s unsure if his interlocutor feels the same. She doesn’t appear to be seeking bad things, but if that were true, what’s she doing here? She must have some openness to the ways of a place like this, even if they conflict with who she is (or thinks she is).

In the World, But Not

To be “in Christ,” the words of St. Paul to describe the life of a Christian, is to be “out of the world” in many ways, though not absolutely. The Christian is a new creation, set apart for the service and worship of God. His eyes are set. “Behold as the eyes of the servants are on the hands of their masters, As the eyes of the handmaid are on the hands of her mistress: so are our eyes unto the Lord our God, until he have mercy on us” (Ps 133:2). His mind is in heaven but his feet are on earth.

But what if our eyes wander? At what point are we now long “in Christ” but “in the world,” rather, looking for the world to show us its form of mercy, giving what it has to give?

Our eyes will wander. We’re in the world and the world has its glamour and snares. Sometimes we don’t notice a thing is evil until we give it a good look. Remember, evil is a distortion of good, error a distortion of truth. “Bad” is not a positive thing, it wasn’t created bad, but began as something good and was disfigured into a state that opposes the reality and order created by God. However, because it retains the semblance of good things, and we men continue to have the desire for what we perceive to be good, we are attracted to that which is not good for us. In other words, the bad looks good! We might repeat another cliché and questionable line from a bar pickup line, “If lovin’ you is wrong I don’t want to be right.”

We who are striving for holiness would do well to remember the attraction of evil. It seems good. So, to avoid it we try to see the world with “sober” eyes, as St. Peter warns in the famous verse about the lion (Satan) prowling for us, looking for prey. Part of those sober eyes is to recognize sin and temptation. We need our eyes open to reality, sometimes so we can shut them quickly when something opposes reality (truth, justice, goodness, etc.).

Sin is not temptation. Temptation is just that, a tempting. Sin, on the other hand, is an act of the will. Sin is like the consummation, the union, with the will and temptation. Only after that unholy marriage does true culpability enter: “Nobody, when he finds himself tempted, should say, I am being tempted by God. God may threaten us with evil, but he does not himself tempt anyone. No, when a man is tempted, it is always because he is being drawn away by the lure of his own passions. When that has come about, passion conceives and gives birth to sin; and when sin has reached its full growth, it breeds death” (James 1:13-15). Temptation points Eve to the fruit. Sin grabs it. And then death claims its victim.

In Catholic moral teaching, however, there is a long tradition of warning against the occasions of sin, which are the places, and often people, that place us in the context or environment of temptation. It is very difficult to discern at what point the dangers we place ourselves in spiritually veer into the realm of actual sin, but the truth is simple enough: don’t do things or go places that you know will tempt you, perhaps beyond what you capable of resisting. God, after all, does allow for temptation, knowing that it can strengthen our virtue, but as St. James just showed us, He does not tempt in the positive sense. It is our passions that “lure” us into occasions of sin. Clearly, even after deep conversions, our disordered passions remember the taste and pleasure of our sins. They are not fully assented to the truth (that we also remember but forget) that pleasures pass, sin is a snare, and that life in God is true and lasting happiness.

In short, if we find ourselves in situations where sin becomes easy, we know the devil will recognize that our guard is down, that we’ve opened ourselves just a crack. He knows its time to approach. He’s sees the lure is set and it’s time to reel in. “What’s a soul like your…” – marked with the chrism of faith and sacrament – “…doing in a place like this?” The short answer is, “looking for trouble.”

Unless we have reached some high level of holiness under worthy spiritual direction and affirming consolations, we should not delude ourselves into thinking we walked into the path of sin looking for souls to save or to flex our virtue. Wake up. We wander into occasions of sin because we’re still a little open to it, still a tad attached. In those moments, when the heart is being pulled between two loves, we should know that God too gives us actual graces. He is there asking what a soul like us is doing in places like that. But He’s at the door, not the table in the corner, bringing us back out into the light. There is no temptation that comes that is more than we can bear with God’s help, “he will not let you be tempted beyond what you can bear” (1 Cor. 10:13).

Simply put, an occasion of sin is dangerous, and too much of it is deadly. We are wise to head the Cure of Ars: “If one does not avoid the voluntary occasions of sin, especially those which have frequently proved fatal to his innocence, it is morally impossible to persevere in the grace of God.”

Curé of Ars on Bad Company:

My dear brethren, I call that man bad company who is without religion, who does not concern himself with either the commandments of God or those of the Church, who does not recognise Lent or Easter, who seldom comes to church or, if he does come, then only to scandalise others by his irreligious ways. You ought to shun his company; otherwise you will not be long in becoming like him without your even noticing it. He will teach you, with his bad talk as much as by his bad example, to despise the holiest things and to neglect your own most sacred duties. He will begin to turn your devotion into ridicule, to make some jokes about religion and its ministers. He will speak to you at length, in scandalous terms, about the priests or about Confession to such effect that he will cause you to lose entirely your taste for the frequent reception of the Sacraments. He will discuss the instructions of your pastors only in order to turn them into ridicule, and you can be quite certain that if you keep company with him for any length of time, you will see that, without even realising it, you will begin to lose all taste for anything which is profitable towards the salvation of your soul. I call bad company, my dear brethren, this young or this old slanderer who has nothing but bad and foul words in his mouth. Take good care, my children, for this type of person has a poison of his own! If you frequent his company, you may be quite certain that you will imbibe it and that, without a miracle of grace, you will die spiritually. The Devil will make good use of this wretch to sully your imagination and to corrupt your heart. I would call that person bad company, my dear brethren, who is curious or restless or backbiting, who wants to know all that goes on in other people’s houses, and who is always ready to form judgments about what he does not see at all. The Holy Ghosts tells us that these people are not only hateful to the whole world but are also accursed of God. Fly from them, my dear brethren; otherwise you will become like them. You yourselves will perish with them

The Catholic Encyclopedia on Occasions of Sin (short)

Is the Occasion of Sin a Sin? (good answer to that question).

Catechism1835: Prudence disposes the practical reason to discern, in every circumstance, our true good and to choose the right means for achieving it.