The Prudent Man Has Mentors 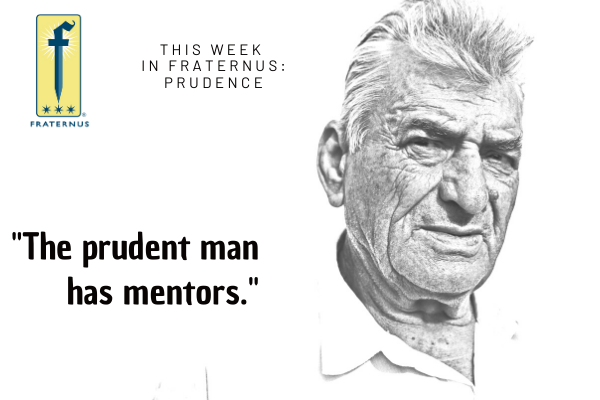 The Many Faces of Prudence

In our home we use a medieval memorization method that is ridiculous. And, by ridiculous I mean the workings of it are over-the-top, and that is the magic of its effectiveness. To describe briefly, you simply take a list of something you want to memorize – 10 commandments, 7 sacraments, etc. – and you imagine a room that symbolizes those things. The fun part, and the secret to its effectiveness, is that the more absurd or exaggerated the image, the more likely you’ll remember it.

For an image of baptism, we might imagine a man with an arm outstretched over a baby. He is holding a blue wooden spoon – maybe it’s on fire too. He lowers the spoon on a baby’s head and says, “Bap!” Yes, it is ridiculous and not exactly an icon of theological truth, but you remember it! Obviously, memorization is not true education, but it can help us recall some essential frameworks so we can fill them in with more complete wisdom.

For our cardinal virtue house, you approach the room’s door, and there’s a huge knocker sticking way out that is a man with three heads. His heads are looking to the right, to the left, and the one in middle looks right at you with deep eye contact. His eyes are blazing blue, huge, and never blinking. You cannot enter the room (to learn the other virtues) until you feed each of the heads a prune (a clue for pru-dence). You can’t enter to the other virtues because all other virtues require prudence, so he holds the door.

The three heads remind us that prudence looks to the past, to the future, and squarely at the present moment, seeking to choose the right action that is informed, effective, and will not cause harm in the future. It foresees without forgetting its past like those obsessed with “progress” and dismissive of all that came before, which it mocks as “convention.” Prudence looks back without being stuck in dead traditionalism as well, knowing the living do not live without those that came before. And it sees the present moment with eyes wide open to the reality it faces, untainted by the distractions of the passions or those that would deceive us.

The reason all virtues are prudent first, is that prudence is the very virtue that bridges the gap from our intellect to our will, or from thinking clearly to acting rightly. If you do not have a clear mind, one able to consider and look dispassionately and with wisdom, then you cannot possibly act right habitually. If you never act at all, but only consider and think about things (and maybe blab about them in comment boxes), but rarely act on things, or act rashly or wrongly, then you are not prudent. Prudence midwifes action from the planted seeds of wisdom.

A good question for us as mentors and fathers, is where do those seeds come from and how are they watered? We should of course note that all truth is God’s. It all comes from Him. We know the parable of the sower, that God casts seeds of grace that can land on soils of differing qualities and receptiveness, but the simplest formulation of that truth is that the seeds – whether they are seeds of grace, truth, or experience – must fall on something that is able to receive it. Being open to truth (having eyes open) is a requirement of prudence and, therefore, the path to all virtue.

We can call this receptivity by another name: humility. Humility, which shares the same root as humus, or the spongy organic matter of soil (as Thomas Connelly noted in last week’s lesson). It accepts what we are in truth, in reality. “Humility involves the full knowledge of our status as creatures,” said Dietrich Von Hildebrand, “a clear consciousness of having received everything we have from God.”

It has been popular to equate receptivity with femininity, because in nature the feminine is “receptive to the seed” and brings forth life, as in mother earth (natures seeds) and mother Church (grace’s seeds), for example. But, let us not forget that masculinity is also receptive in its essence and not merely “active,” as is often asserted, because all true masculinity is firstly filial. In other words, all men are men because they are first sons. And to be a son is to be receptive, as the many times Jesus speaks of receiving all He has (authority, life, etc.) from the Father and passes it on only because He has received it. To be a man, therefore, is to be a son that receives his father’s wisdom and then learns to pass it on as a father. Receptivity precedes activity in the life of men.

In different stages of life, we see different aspects of prudence – the heads looking more intently in the needed direction. When we are mentors and fathers, we are asked to give our wisdom which has been gained from experience. To do this requires humility, because this very often is the revealing of faults, because wisdom is not only gained in victory, but defeat too. In our youth we have to be humble enough to look to the wisdom of elders, acknowledging that no matter how much we have learned by other means, we have simply not lived enough to have known truth tested and purified in lived truth. The young man without fathers and mentors, or receptivity to them, is greatly deprived because the son must “borrow” the strength and wisdom of the father until he gains his own. Prudence could almost be said to be impossible for youth unless he is consciously connected to mentors. He must be receptive. In the throes of gaining experience, perhaps midway between son and father, we often need the correction and eyes of another – fraternity. There is no greater sign of an imprudent man than one who receives corrections poorly or refuses them outright. The imprudent man rejects brotherhood to his own peril.

This is why we in Fraternus use that word so frequently – mentor. Mentoring is that unique form of education that acknowledges the natural needs of men in their different stages – from the son and his youthful energy to the father and his hard-won wisdom to the brother who strengthens his fellow. Mentoring grasps the need for tangibility (experience), humility, mutual dependence, and relationships. It does not view wisdom as a collection of facts or knowledge, but plants it within the specificity of friendships and places. Mentoring dismisses those that believe in the self-made man and the lost cause, the one not worth investing in. Mentoring finds what is true and good in the other and offers correction to error and sin. Mentoring is not passive nor overbearing, meaning it doesn’t sit idle at another’s destruction, nor destroy another in the name of helping. And, especially, it never seeks to give what it does not have, which is why it receives prudently the wisdom of others and only insofar as it does that does it then give it away.

The wisdom held by a mentor, then, is not truly one’s own, but is truly a gift received and given. If it does not do these things – receive and give mentoring – it is not prudent.

From The Introduction to the Devout Life by St. Francis de Sales:

WHEN Tobias was bidden to go to Rages, he was willing to obey his father, but he objected that he knew not the way;—to which Tobit answered, “Seek thee a man which may go with thee:” and even so, daughter, I say to you, If you would really tread the paths of the devout life, seek some holy man to guide and conduct you.

Boys are separated from childhood be men, by Jason Craig

Why Catechesis and Apologetics are not evangelization, by Michael Therrian

If you have ears, listen (video sermon on prudence)

Catechism 1788: To this purpose, man strives to interpret the data of experience and the signs of the times assisted by the virtue of prudence, by the advice of competent people, and by the help of the Holy Spirit and his gifts.