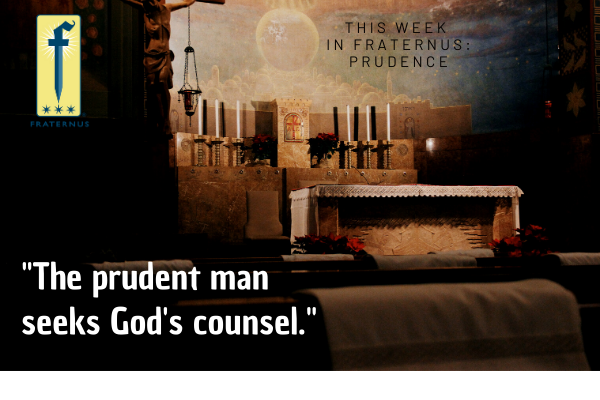 I don’t tire of the nitpickery of St. Thomas Aquinas. In case you didn’t know, it’s making fun of his nitpickery that bore the insult, “How many angels can dance on the head of a pin?” – which came from Protestant opponents who saw Aquinas’ thoroughness as useless hair-splitting. Clearly, they were already confusing their theology, since angels are spiritual only and needles are material only, so we can pop that bubble with the pin. Aquinas’ thoroughness is not absurd questioning, but helpful distinguishing.

Counsel, one of the seven gifts of the Holy Ghost, is one of those distinguishing words. In Fraternus we look at this virtue in relation to prudence, proposing that “the prudent man seeks God’s counsel.” This might seem like harmless or useless chatter – “Just do what seems right!” – but we can forget that prudence is the virtue wherein we come to know and enact the truth by our reason and experience. Why, then, would we seek God’s counsel? Sure, we could indulge that God’s friendship is enjoyable, but do we need His counsel in our “research into reason,” as Aquinas puts it? Has He not given us our own intellect and free-will in order to use it on our own? What and why does God “counsel” in us, actually? Is it in all matters, some, or merely when we give permission?

Counsel, as a gift of the Holy Ghost, is especially oriented toward those things pertaining to salvation. Therefore, this gift comes to us especially through the sacraments of initiation (Baptism, Confirmation, and the Eucharist), and is not available to those without the Holy Ghost. God is able to give actual graces to prompt non-Catholics to truth, but this is a gift for you, the Baptized faithful.

Because we have a rational soul that was created for heaven, it would make sense that God speaks to us and “moves” our soul, as Aquinas puts it, by the direct action of the Holy Ghost. The one who is open to receiving this counsel (“amenable to the motions of the Holy Ghost”) will be disposed to live life as if its end is heaven, because it is, and as if God cares, because He does.

So, while it is true that there is an earthly sense to prudence, to living in accord with reason, the gift of counsel is always “helping and perfecting it,” says Aquinas. Yes, you can reason by the power of your own intellect, but because of your limitations and sin, you’re cloudy. To gain clarity you need mentors and, in a very similar way, you need God’s actual counsel, which is why the wisdom of having counselors on earth and heaven is associated with prudence, and why the lone-wolf and prideful man is not prudent. (“…through the gift of counsel … man is directed as though counseled by God, just as, in human affairs, those who are unable to take counsel for themselves, seek counsel from those who are wiser.”).

God not only gives us the intellect and will to help us choose our way, but He also helps us along the way in those choices, and He does so without removing from us the truth of our free-will. This is that great paradox of God’s will and our own, which so vexed people like Calvin. If we listen to Him is it our will, truly? Or, conversely, if we act on our own does it make God “powerless” to alter our direction?

But anyone who has lived the relationships of marriage, brotherhood, and so on, knows that wills can be both separate and one when they come into harmony, as in a marriage with accord and peace. Jesus calls us “friends,” and so we are, and as Augustine said of a friend, we can be toward them like “two souls in one body” when it comes to life. This is the life of the saintly, those that realize God’s movement in their soul and respond.

This active participation in the life of our soul by God is a rebuke to the deists (which many of America’s founding fathers were), which think of life as “set in motion” by God but then left up to man’s choices and actions to make it good (or bad). Benjamin Franklin, for example, kept a very strict discipline of his discipline – he focused intensely on isolating the virtues he needed to grow in and keeping tabs on his growth. Yes, there is merit to such intensity, but there was clearly in him an understanding that it was exclusively his work. In other words, the virtue of Franklin was pagan and his theology appears deist (sometimes Quaker too, oddly). God gave us a mind and He expects us to use without coming to Him to make our decisions for us, or so deists think. This is the understanding of things that causes the atheist Richard Dawkins to chide Christians as childish, because we don’t grow up and take responsibility for our own action.

Aquinas actually looks at this issue too. The analogy he gives (that we could apply to the deists) is in saying that if God’s action in us stopped at setting the world in motion, He would simply be the divine “mover” that got things going but then stops, as when a builder stops building once the house stands. There is something of this in the “nature” of the world itself. But, if God is also the “form to which the movement tends,” meaning that He is perfecting us still further until we reach that fullness of life – as when St. John says what we will be in Him is not yet known, but we will indeed be like Him (1 John 3:2) – then He continues working in that creature in a unique way to bring it to that end. Aquinas says it’s in “time but not space,” meaning it is gradual but not a physical part of the world – he works in us, Spirit to spirit. He even continues this “counsel” in the saints in heaven, in a way of sustaining them in that life, the analogy from Aquinas being the sun’s way of continuing to add and provide light even after the light is appeared. This is all because our soul yearns for the eternal, for God Himself, and God answers that in us by drawing us to Himself. Like speaks to like, and His spiritual nature speaks to our spiritual nature so that we can direct our life in this physical world.

In other words (and as an answer to deists), yes, God planted the seeds of creation and they grow according to their own nature. But, unlike nature, we are a garden that He tends actively, protecting the shoots from harm and bringing them to maturity in beauty and fruitfulness. With no other creature does He act in this way. We can carefully say He “can’t” act in this way toward them, because they do not have the rational soul that is akin to Him in “image and likeness.” That is a dignity belonging to man alone.

This is why men of prudence, men who seek the wholeness of truth in all areas of their life, seek God’s counsel. The birds have no need of God’s counsel and can’t really receive it, because they have all they need in their instincts to reach their simple and beautiful ends. We, on the other hand, have an instinct in us that knows that, although we can’t fly with the birds here, we are meant to soar somewhere above this earthly existence. That instinct isn’t in our flesh but is in our soul. And as the Father provides for the birds so they may fly, as Jesus says, so too He provides for us what we need to reach heaven, His counsel. If we want to be wise, which means able to bring all things to their fullness and unity, then we must rely on the One who can help us to our absolute end, God.

From the sermons of the Cure of Ars:

If you want to be able to recognize [errors], my dear brethren, you must ask the Holy Ghost for His light. He alone will give you this grace. No one could, with impunity, point out these sins to you; you would not wish to agree nor to accept them; you would always find something which would convince you that you had made no mistake in thinking and acting in the way you did. Do you know yet what will help to make you know the state of your soul and to uncover this evil sin hidden in the secret recesses of your heart? It is humility. Just as pride will hide it from you, so will humility reveal it to you.

A priest on the gifts of counsel and fortitude

What are the gifts of the Holy Spirit?